Body Worlds: An Exercise in Thought

Body Worlds: An Exercise in Thought 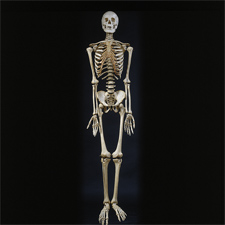 You may have heard of Body Worlds, an exhibition about health and the human body that has been at major cities for the past several years. It is not like other exhibitions you may have seen, however, in that it features real human bodies displayed to educate the viewer about his or her own body. These bodies are preserved using a technique called plastination, invented by Gunther von Hagens, the scientist who is also the mind behind the exhibition, and are displayed in a dark room in glass cases. Many people come to see and discuss these exhibits, and since its inception, it has raised over $200 million in revenue.

I visited the Body Worlds Vital exhibition in Boston’s Faneuil Hall recently and found it hard to believe that I was looking at bodies that had once been moving around and breathing. Because of the techniques used to preserve them and the sometimes silly poses in which they were placed, it was easy to lose track of the fact that I was looking at the body of a once-living human being. Nonetheless, the “weirdness” factor rivaled the educational value. The placards that accompanied each display were filled with healthy living advice—for example, dancing is good for the immune system—and facts about each of the displayed body part or parts. However, the text was difficult to read in the dark room, and it was simpler, or more enjoyable, to stand and gawk at the displays rather than read the placards.

One idea behind showing real bodies as opposed to models is that every body is a unique specimen and has a story to tell. So does creator Gunther von Hagens. An East German émigré, von Hagens was actually imprisoned in his early 20s for attempting to escape to West Germany, where he eventually earned a medical degree. Later in his life, he invented the plastination technique used to mummify the bodies, after which he began touring the world with his exhibition in 1995. Since then, it has given rise to several copycat exhibitions.

The process von Hagens invented, done at one of many plastination facilities, involves draining the bodies of fluid and replacing it with silicone or epoxy resin. The preserved bodies lose some of their color, but their organs, joints, and bright red, oxygen-suffused muscles are revealed by the skin being peeled back. In the exhibition, the bodies are shown in poses such as a man swinging a baseball bat or two men playing hockey; the organs, joints and muscles are held in their proximate locations.

One concern I went in with, above all others, was where the bodies and body parts come from. Von Hagens claims that every body on display comes from a donor who gave written permission during his or her lifetime to have his or her body displayed. However, as NPR reports, there is no paper trail establishing that every body that you see matches the appropriate forms. Each of the bodies is separated from its corresponding form after the consenting document is verified with a death certificate at the Institute for Plastination. This process, which may seem questionable to some, was actually established in order to preserve anonymity of the bodies on display. Moreover, many argue that though one might take von Hagens’s word that the bodies are donated, there is no word to go by as to where each of the organs used in the exhibit are from. This makes many call into question the traceability of each piece of anatomy. On the flip side, the question arises as to what is more important, maintaining a donor’s consent in the face of privacy, or having clear, verifiable documentation for each piece of the exhibit.

In what could be seen as further pushing the envelope, Body Worlds’ competitor, Bodies: The Exhibition, raises similar questions. The site verifies its specimens come from “persons who lived in China and died from natural causes [and] . . .were unclaimed at death.” Is either this or van Hagens’s documentation system acceptable for something many consider of vital importance: respect for the human body? Or is the process of maintaining anonymity exactly that: respect for the privacy of the person whose body is displayed, as well as respect for that person“s survivors?

Sometimes technology raises the ethical question, “If we can do something, does that mean we should?” I think the ability to preserve human bodies—for show and for medical study—raises a similar question. Even if the bodies preserved and displayed in certain poses for a paying public pass all the ethical tests, is it moral to do so? Is the beauty and wonder of the human body truly captured in these poses? Is this the best way to celebrate and learn about the human body? The educational and even artistic benefits of such exhibits are clear for many, but the moral conundrum and questionability of the bodies’ origins may always be up for discussion, and perhaps that is why the phenomenon remains so interesting.

Did You Know?
Much of the educational factor to exhibits like van Hagens’s and its competitor, Bodies: the Exhibition, lies in how the bodies are posed. In many cases, the plastinates are formed in such a way to best reflect their physicality. Those who were athletic in life, for instance, are often positioned playing a sport or dancing. This allows viewers to witness how the body and its muscles work and move during certain activities. The process not only provides education, but also, some find, inspiration. Showcasing the abilities and accomplishments of the human body not only promotes health and wellness, it also shows the results of determination and dedication: a kind of triumphant realization akin to watching the Olympics.

About the Author: Nick Perricone

Nick Perricone was a 2013 Fall intern.