Underground and Underwater: A River Runs Through It

Underground and Underwater: A River Runs Through It 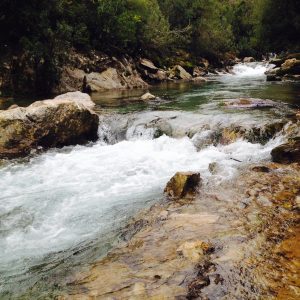 Caves around the world hold untold secrets, and there is much we still do not know. However, intrepid spelunkers, divers and scientists are making great strides in exploring these dark depths, yielding fascinating results. Underwater and underground rivers have been found in caves and beneath the deep, and more information is being found every day.

In 2007, British diver Stephen Bogaerts and German partner Robbie Schmittner made an amazing discovery of a submerged cave system underneath Mexico’s Yucatán Peninsula. After more than 500 dives, they concluded it is the world’s largest submerged cave system, and that the network of caves are connected and form a single system that is 95 miles long—essentially creating an underground river.

Also in the Yucatán Peninsula is the underwater river known as Cenote Angelita (Spanish for “Little Angel”). A three–foot thick layer of hydrogen sulfide separates the freshwater from the saltwater on the bottom. There are trees and branches strewn about just like a normal river, except this one is completely submerged! Many divers explore this river, and the pictures from diver Anatoly Beloshchin are absolutely stunning. He and his crew even brought poles for some underwater fishing!

On the other side of the world, researchers from the University of Leeds discovered an underwater river flowing at the bottom of the Black Sea. The highly salty water is creating riverbanks and flood plains as if it were on the surface. This channel flows for about 37 miles, and is one of the only underwater channels to be found still flowing. Scientists theorize that these kinds of underwater rivers are essential in delivering nutrients to the deepest parts of the ocean.

Underwater exploration is endlessly fascinating, as is the information it consistently yields. The pictures and stories almost make me want to drop everything and take a scuba diving trip! Almost.

Did You Know?
The Quintana Roo Speleological Survey website is a massive database full of information concerning the underwater cave systems of Quintana Roo, Mexico. They have lists of the longest and deepest caves in the area, as well as information about cave life and proper conservation.