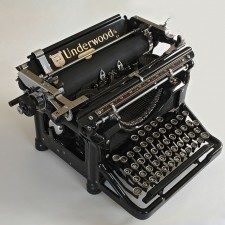 Raise your hand if you’ve used a typewriter in the past five years. Odds are you haven’t, unless you’re like Tom Hanks, in which case, you’re a passionate collector of the old writing machines. In fact, Tom Hanks is so devoted to typewriters that he created an app with developer Hitcents to capture that old typewriter feel in the digital age. Hanx Writer, available on the Apple App Store, is a throwback to an earlier era that does not demonize our modern world, but instead uses it to celebrate former, dependable machines like Hanks’s own first typewriter: a Hermes 2000.

In an opinion post in the New York Times, Hanks writes, “I use a manual typewriter—and the United States Postal Service—almost every day. My snail–mail letters and thank–you notes, office memos and to–do lists, and rough—and I mean very rough—drafts of story pages are messy things, but the creating of them satisfies me like few other daily tasks.” Hanks enjoys some things the old–fashioned way, but he admits that he uses a computer to get certain deeds done quickly. He doesn’t reject computers, he just prefers many qualities of typewriters, including “the sheer physical pleasure of typing; it feels just as good as it sounds.”

Clearly, Tom Hanks’s beliefs struck a chord with the American public, as Hanx Writer was the number one app in the App Store in August 2014. Perhaps the popularity was solely due to Hanks’s fame, but part of me wants to believe that people wanted to try out a typewriter without the heavy commitment.

After reading the review, I decided to download the app and try it for myself. Hanx Writer is a well–designed app that does exactly what it advertises: It turns your phone into a typewriter. The click–clack of the letters certainly is satisfying. I felt more aware of what I was typing, so I took a little more time doing it. Though, I will readily admit that I typed some nonsense just to hear how fast the clicks could get! In the end, I was pretty entertained and, well, as one of Tom Hanks’s most celebrated characters, Forrest Gump, would say, “That’s all I have to say about that.”

There are several websites and forums run by typewriter enthusiasts, where they display and discuss their machines with other devotees. There’s no telling how deep this rabbit hole goes, but for typewriter lovers, it’s just one of many available resources and opportunities to indulge in their hobby.

About the Author: Kyle Amato