Patriots’ Day at the Races

Patriots’ Day at the Races 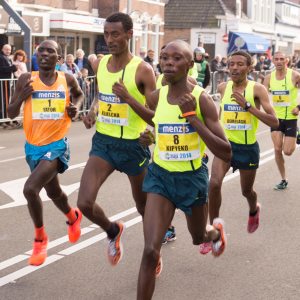 The Boston Marathon is more historic than you may think! Starting on

April 19, 1897, it is the oldest annual marathon in the world, and is one of the best-known road racing events globally. It has traditionally been held on Patriots’ Day because the Boston Athletic Association, which established the event,wanted to link Athenian and American struggles for freedom. The holiday used to be on April 19 regardless of theday of the week it fell on. But in 1969, Patriots’ Day started being observed on the third Monday in April, and the marathon date adjusted accordingly.This is why it’s referred to as “Marathon Monday”!

From a humble beginning of 15 participants in 1897, the race now draws in tens of thousands of participants, with 30,251 registrants in 2015, 46 percent of which were female. Women were not allowed to officially enter until 1972, but in 1966, an unregistered Roberta Gibb became the first woman to run the entire marathon. In 1967, Kathrine Switzer was the first woman to run and finish withan official race number, but only because she registered as a man, “K.V. Switzer.”2 In 2007, astronaut Suni Williams ran the Boston Marathon from space (on a treadmill)! She circled the globe a few times during her run!

The Boston Marathon is, of course, still one of the most popular road raceson Earth.For 2018, several companies have designed some awesome shoes just for the event! If you’re racing this year, good luck, do your best and stay hydrated!