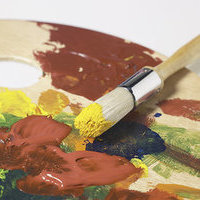 It’s easy for a work of art to be lost to the ages and, unfortunately, all too common. But what about art that’s been hidden behind other art? Though not as common as a piece simply being destroyed, there is a surprising number of paintings underneath other paintings. Discovering these hidden works has been almost impossible until recently, when X–ray technology has given art historians the opportunity to see behind art without damaging it. Nowadays, art and history lovers are able to have their cake and eat it too.

Pablo Picasso’s The Blue Room (1901) has been part of the Phillips Collection in Washington, DC, since 1927. Having long been suspected to have something under the surface, the painting was subjected to X–ray technology in the 1990s, which revealed a fuzzy image. More recent imaging has divulged clearer results: a painting of a mustachioed man. But why is he there? Curator Susan Behrends Frank says that in 1901 Picasso “could not afford to acquire new canvasses every time he had an idea that he wanted to pursue.” Thus, he repurposed the canvas for the work we know today. X–ray imaging was also used to discover that a hidden N. C. Wyeth painting was actually in full color, not just black and white as was previously thought.

In a much lower–tech example, an oil sketch by John Constable was found beneath another painting of his, Branch Hill Pond: Hampstead (ca. 1821–22). The oil painting was discovered beneath a lining canvas after it came loose.

A 500–year–old wall with a mural by Giorgio Vasari on it was believed to be hiding the lost Leonardo da Vinci painting The Battle of Anghiari. Restorers attempted to search for the painting through existing gaps in the Vasari mural using endoscopic technology. Unfortunately, the search was discontinued in September of 2012, as many art historians saw the process as invasive and potentially damaging to the Vasari mural. We may never know if da Vinci’s legendary painting is behind the wall, but this mystery and other discoveries are leaving the door open to whole new possibilities.

Sometimes, hidden art is never meant to be seen again. Artist and construction worker Pajtim Osmanaj turned a job site into his canvas, using his off–time to create paintings that would soon be bricked over. It’s an interesting project that adds artistic value to the building, whether future tenants will know it or not.