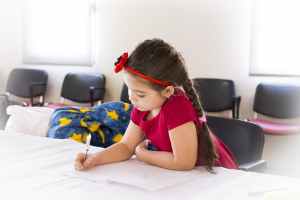 Explaining the difference between eating your grandpa and asking him to eat with you can be tricky to distinguish without proper comma knowledge. Like any skill, grammar should be practiced to get better at it. Many students struggle to keep up with the demand of grammar in school; rules like subject-verb agreement, preposition placement and semicolon usage cause students to seek out aid.

As proven in the 2004 film I, Robot, computers can’t replace the experiential knowledge of humans. However, instead of learning the appropriate grammar rules, some students have been using grammar correction systems like Grammarly.com and WhiteSmoke.com to catch their mistakes.

Each grammar correction service is relatively similar, providing services that are geared for general grammatical and plagiarism checking services. Students can upload their assignments and, for free—or, for more advanced versions, with a subscription—the submission is scanned for errors. For a student who’s not comfortable with grammar, this is an easy short-term solution, and many often rely on services like these to check their mistakes.

But what about poor Grandpa?

According to these programs, sentences like “Let’s eat Grandpa” are correct from a grammatical standpoint. The sentence follows necessary conventions, but the software can’t conceptualize the topic of what it is analyzing. In fact, it only understands the structure of the sentence. Unlike a human, the technology does not understand readability, meaning or context—all of which are very important in the writing process.

This doesn’t mean students shouldn’t use these programs. Grammarly, WhiteSmoke and their competitors help many users daily with their grammar, but the services of these programs are better used as a first defense. The software can be a useful tool for students as a first, fresh “set of eyes” for an assignment. But, most importantly, students should know how to look beyond the errors the software catches as well as to be able to verify the errors’ validity and understand the grammatical concepts behind them.

Dorothy Fuller and Reva Potter support the idea of using grammar correction software in the classroom. In their 2008 report [PDF link] for the National Council of Teachers of English, Fuller and Potter found that correction software could be utilized as a stepping-stone to initiate communication within the classroom. The report explains that “students became more familiar with the grammar checker, more confident in its uses and more cautious about its limitations.” It is by using these applications to point out simple errors that teachers can show students the necessary steps to prevent them. However, if students do not learn grammar rules beforehand and rely on software aids instead, then incorrect habits will follow the students into their professional careers. While the computer might not care that Grandpa was eaten, a future employer will.

Students today might rely heavily on spell checkers, but they still love to spell! The amount of contestants enrolling in the National Spelling Bee has been on the rise since national television coverage on ESPN began in 1994. In the past, the contest has also been covered by popular networks like NBC, PBS and ABC.