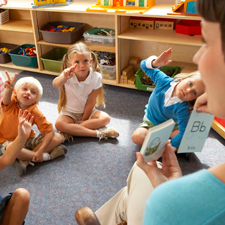 Instead of calling attention to students who misbehave, teachers in some schools are now practicing a technique called “active ignoring.” The idea behind it is simple: Teachers are no longer reprimanding students for their bad behavior but instead waiting for them to correct it on their own. When a student exhibits good conduct, they are verbally praised. For example, a teacher won’t acknowledge a student who calls out an answer. Instead of telling them to raise their hands or that they shouldn’t call out, teachers only acknowledge students with their hands in the air and who are doing the right thing.

This technique is similar to one used with parents and misbehaving children, and psychologists are curious about how well the idea will adapt to being used in a group setting. These Teacher-Child Interaction Training (TCIT) programs are being tested in several schools and are focused on preschool children; early findings suggest that not just the regularly misbehaving students improve, but the behaving students improve as well.

Active ignoring doesn’t only help students when in the classroom. Through active ignoring, children learn how to calm themselves down when upset. It also shows students that there are consistent consequences for their actions and helps them to establish limits and learn what is right and wrong to do.

Discipline actions are still taken if a child is seriously misbehaving. However, instead of being yelled at in front of the class, students are asked to move somewhere else until they have calmed down. The student is then told that when they are calm they can return to class. This method still allows serious issues to be addressed but also gives control to the students about when they feel they are comfortable to return, and doesn’t cause them to feel embarrassed by the extra attention discipline sometimes gives.

At first behaviors can worsen as students begin to adjust to the change and teachers begin setting new and different limits. According to those in the program, the hardest part is for teachers to ignore the bad behavior. But teachers participating in the TCIT programs find themselves reporting positive effects about two weeks into the program. Since one school has adopted the program, disruptive behavior has dropped 32 percent in the last school year. Any progression in the learning environment is beneficial to all involved, and sometimes that means trying methods that may seem odd at first but reinforce what really matters in the classroom.