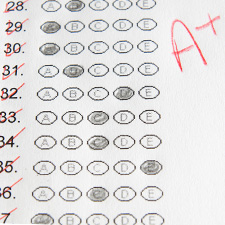 Great teachers come in many forms and can teach at different grade levels, but they all share one thing: a knack for building their classrooms specifically around their students’ needs. Since October 2014, NPR has been celebrating these excellent educators through their 50 Great Teachers multimedia series.

Sarah Hagan of Drumright High School in Oklahoma is determined to make trigonometry and algebra fun; she has brightened up every inch of her classroom with colors, teaches songs to memorize the quadratic formula and has her students glue each day’s lesson into notebooks in lieu of using actual textbooks. Another quirk in Hagan’s classroom is that she will not allow her students to fail. They receive an A, a B, or a Not Yet—which means they have to keep trying until they get at least a B. She’s been known to spend hours after school working with her students until they have learned the material and can make the grade. She is willing to do whatever it takes to engage with her students and help them succeed. The response to her dedication and outside–the–box approach has been wildly positive—on May 6, 2015, Drumright honored her by giving her the key to the city and declaring the day Sarah Hagan Day in her honor.

I had a teacher a lot like Sarah Hagan once, back in fifth grade at Park Avenue Elementary School in Connecticut. In his class, Mr. Krafick had a unique program, one that I loved and maybe somewhat abused: a rewards system where you could earn free time based on how much you read. I already enjoyed reading at that age, but once it was incentivized, I became a maniac; I would read constantly—on the bus to and from school, during lunch and recess—everywhere I could. And when I earned my precious free time, I mainly just read to earn even more free time, like I was in my own personal pyramid scheme.

Looking back more than ten years later, I’m a big fan of Mr. Krafick’s methods for teaching me to love books. I can’t be the only one, either: in 2007, he became the principal of Park Avenue School.

It could have totally backfired for Ms. Hagan to decide not to use textbooks or for Mr. Krafick to let students essentially skip portions of lessons. But in both cases, the teachers trusted that they knew what was best for their classroom and were able to have lasting impacts on their students. To me, that willingness to personalize the classroom and take risks is the mark of a great teacher.

Did You Know?
According to a 2013 Pew Research survey asking Americans which professions they think contribute the most to society, teachers ranked second, behind only the military.