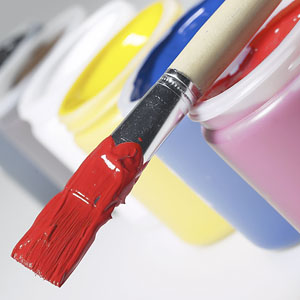 If you were to begin talking about pop art, most people will immediately think of Andy Warhol’s Campbell’s Soup Cans (1962). If they’re more familiar with the movement, they may consider other works such as Wayne Thiebaud’s Three Machines (1963) or Jasper Johns’s Flag (1954). The subjects of these pieces might seem mundane and everyday, but the pieces are anything but drab and monotonous. A spark of irony lurks within the bold primary colors, and a sly humor is incorporated into each hint of mass media and consumer goods.

Pop art crashed onto the scene between late 1950 and 1970. After World War II, there was a rise of mass consumerism in the United States; there was also cultural and political tension due to the Vietnam War and the Civil Rights Movement. Artists utilized the indulgence and uneasiness of the time as a spark for their movement away from the previously popular abstract expressionism.

The artists continued to challenge the meaning of being an artist, the definition of originality and even the characterization of art. Appropriation was the method of choice for pop artists; by intentionally modifying and developing works intended for average consumers—photographs, food labels, attributed fonts and colors—pop artists transformed commonplace items into artwork. Pop artists wanted everything to be seen as having the ability to be transformed into art.

In celebration of this radical movement in the art world, museums have been creating exhibits that break away from Americanized pop art and focus more on pop as an international phenomenon. The Museum of Contemporary Art Australia ran a seven-month exhibit, Pop to popism, which ended in early March 2015. Similarly, the Walker Museum in Minnesota had a pop art exhibit titled International Pop that ran through August 2015. The exhibit had a total of 140 works of art from 14 countries, including France, Brazil, Argentina, Japan and Germany. Striving to reach beyond what is commonly imagined when pop art is called to mind, the Walker Museum encouraged participation through roundtable discussions, essays from scholars and critics, and a film program.

Another pop exhibition is currently at the Tate Britain museum in London. The exhibit, titled The EY Exhibition: The World Goes Pop, opened September 17 and runs into 2016. The World Goes Pop features 160 pieces of art from Latin America to Asia and from Europe to the Middle East. The Tate’s mission for the exhibit is “highlighting key figures of the era who have often been left out of mainstream art history. It will also reveal how pop was never just a celebration of Western consumerism, but was often a subversive international language for criticism and public protest across the globe.” The hope is to move away from overly familiar pop images and instead reveal other nuances of pop art. These nuances include the way female artists portray women, use of folk traditions, and pieces depicting more than just the United States’ rise in consumerism.

Andy Warhol had a collection of 612 cardboard box time capsules. He used them to store movie ticket stubs, unpaid bills and even Clark Gable’s shoes. Curators also discovered a piece of Caroline Kennedy’s birthday cake within the capsules.