A Laughing Matter: The Benefits of Laughter Yoga

A Laughing Matter: The Benefits of Laughter Yoga 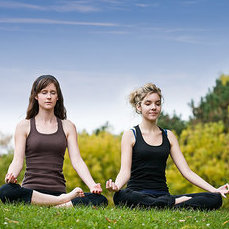 When I took my first yoga class, I wasn’t sure what to expect, but I knew it would be a fairly quiet experience. Or so I had heard. If my instructor had told the class to lie on the floor and laugh for 20 minutes, I’m not sure what I would’ve done. (To be honest, I probably would’ve left the room.) However, when practicing laughter yoga, an instruction like that is commonplace. Yes, laughter yoga is actually a form of meditation, and it seems to be growing in popularity.

In the 1990s, Dr. Madan Kataria became interested in reading about the benefits of laughter for mental and physical health. He became so engrossed in the research that in 1995 he started his first Laughter Club, which convened in a park in Mumbai with only five people. Soon these laughter meetings were being held frequently. Dr. Kataria claims that regular laughter helps support the body’s immune system, lowers blood pressure and can help with depression. What started as a small congregation in a park has now grown into a trend of sorts, as there are around 5,000 laughing clubs today in 53 countries.

Let’s Laugh Today is a laughter yoga company in Walpole, Massachusetts, owned by Bill and Linda Hamaker. The classes they offer do not resemble the typical yoga class. There is no downward–facing dog or mountain pose. Instead, the hour-long classes incorporate a series of laughter-inducing exercises mixed with aerobic exercises, chanting and yoga breathing. It’s common to be laughing for 20 minutes at a time. Beyond the mental benefits of practicing laughter yoga, there is also a considerable spiritual component—in order to laugh on the spot you have to be present within the moment.

Also, laughter is seemingly contagious. Laura Malloy teaches laughter yoga at the Benson–Henry Institute in Boston and she encourages her students to make eye contact with each other throughout class, as it keeps the flow of laughter going. Ellen Mercer is a laughter yoga instructor in Oklahoma City and it’s not uncommon to see her students walking around the room high-fiving each other while laughing or simply belly laughing on the floor. She often works with elderly individuals, and some students are suffering from dementia and Alzheimer’s disease. Mercer sees laughter yoga as a way for her students to communicate when they may not be able to express themselves verbally.

Laughter yoga makes sure to incorporate acts of playfulness into adults’ lives, which could be attributed to the fact that on average children laugh 300 to 400 times a day, whereas adults only laugh 10 to 15 times.