A Glimpse into the Future Library

A Glimpse into the Future Library 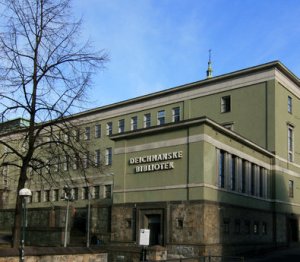 With the vast strides we have made in technology, it’s hard to imagine what reading a book will look like in the year 2114. It’s also seemingly impossible to predict what the content of these novels will be. I’m sure Jane Austen never saw Pride and Prejudice and Zombies coming. However, thanks to Scottish artist Katie Paterson, one book slated for publishing in 2114 is already complete.

Paterson is a visual artist whose latest work, Future Library, is perhaps her most ambitious project to date. It is a one–hundred–year–long project that began in the spring of 2014 with the planting of one thousand fir sprigs and will grow to the publication of 100 works. The forest has been planted just outside of Oslo, Norway, and the trees will be used to print an anthology of books in 2114.

Between 2014 and 2114, one author will be invited each year to contribute to the anthology. The authors’ manuscripts will be housed in the New Public Deichmanske Library in a special room designed by Paterson along with the architecture practices of Lund Hagem and Atelier Oslo. The room will be lined with wood from the forest, and the names of the authors as well as the titles of their works will be on display. The room will also include a printing press to ensure that paper printing will be possible.

The Future Library Trust, a committee that will be updated every 10 years, is tasked with inviting the authors as well as preserving the forest and manuscripts. Work submitted to the project will not be seen by publishers, critics or readers until the anthology is released.

The inaugural author is Margaret Atwood, an award–winning Canadian novelist and poet best known for The Handmaid’s Tale. Atwood was honored to be asked to participate and says, “Future Library isn’t just a visual art project. It’s a literary art project. Katie is the form, and I’m the content.” Atwood’s piece is entitled Scribbler Moon, and that is all that is known about it—and all that will ever be known by anyone reading this blog post today!

Paterson describes her inspiration for the project, “I had the idea for Future Library quite a while ago. . . . I had a vision of tree rings as chapters in a book, growing imperceptibly over time, with tree trunks pulped into paper that would compress these years of growth into material stories. Written now, but for an entirely future time and place. . . . Perhaps when the authors start writing for Future Library, by some strange osmosis their ideas are going to find themselves growing through the trees, like the air or water that feeds them.”

For 2015, the Trust chose David Mitchell, a bestselling British author, as the second writer to contribute to Future Library. Future readers will likely enjoy the work of a man that Esquire describes as a “genre–bending, time–leaping, world–traveling, puzzle–making, literary magician.” Mitchell will hand over his manuscript in 2016 at a ceremony in Norway.

Though the anthology will not be published in most of our lifetimes, 1,000 certificates are available for purchase, costing $1,000 or £625 a piece. Each one entitles the bearer to a complete set of the texts printed on paper made from the trees in 2114. The price may seem steep, but the certificate itself is a piece of art, and it comes down to $10 for each author’s work—a bargain even in 2015!

About the Author: Annette Cinelli Trossello

Annette is a Senior Editor and Project Manager at PSG. She likes to spend her free time in libraries, parks or museums with her children and husband. Once the kids are asleep, she loves to curl up with a good book. She is currently working on an original screenplay!