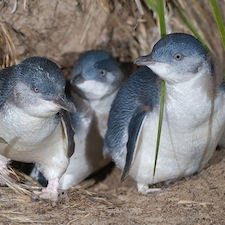 You’re driving to work in the morning, hustling to arrive on time, and suddenly the car in front of you slams the breaks. Annoyed, you poke your head out of the window to see what the problem is and—to your surprise—you spot the tiny, paddling feet of a mother duck and her chicks waddling across the road in a tight line before the car in front of you. Are you still irked? Maybe, maybe not. Now imagine if the ducks were actually little penguins!

In Australia and New Zealand, it’s a common sight to spot groups of the little blue penguin (also called the fairy penguin, but officially known as Eudyptula minor) tottering about on sandy roads near the coast. The smallest penguin species in the world, these little blue birds weigh about two to three pounds and nest their colonies on rocky island shores or around the bases of cliffs in parts of Oceania. Feeding on small fish, squid, and krill, they hunt in inshore waters and return to their nests at night.

But their commute poses a problem for the town of Oamaru, New Zealand. The city, in an effort to protect the penguins and promote tourism, had assembled nest boxes in secure areas for the small birds to colonize, and also provided nearby vantage points for visitors to watch them. However, the penguins must cross a busy and therefore dangerous overpass road when traveling from their hunting waters to their nests. Philippa Agnew from Oamaru’s Blue Penguin Colony knew the penguins needed further help, and came up with an idea to protect the birds by constructing a tunnel below the road.

Some residents feared that the area’s historic character would be compromised by the tunnel.2 But the majority of the community of Oamaru and the neighboring towns largely supported its construction, and a significant portion of its funding came through donations.

The tunnel was completed in September of 2016 and only took about three weeks to build. Video footage shows that about 20 penguins have taken to the tunnel and have used it daily since its installation.

Efforts do not stop at the tunnel. Plans to protect New Zealand’s little blue inhabitants include galvanizing awareness of penguin conservation and inspiring similar protection efforts.

These little birds certainly deserve such a big win. Next time I watch a flock of turkeys or Canadian geese wobble across the road, I’ll have penguins on my mind.

A long time ago, penguins could fly. Science suggests that the birds lost this ability as their wings eventually became smaller and heavier. These wing changes made flying more difficult—and, eventually, impossible—but resulted in wings that were far more useful for swimming, diving and snatching up tasty fish.

About the Author: Sarah Rush