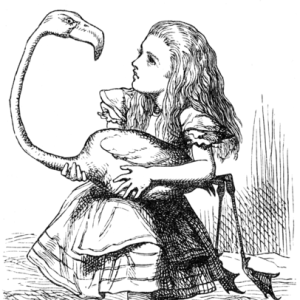 Lewis Carroll’s Alice’s Adventures in Wonderland remains popular 150 years after its first publication; in addition to the 2010 blockbuster movie starring Mia Wasikowska and Johnny Depp, over twenty other film adaptations exist, as well as numerous children’s shows, collectibles, comic books, musicals, ballets, operas and more. What many don’t know is that Alice Liddell, the inspiration for main character Alice, seasonally vacationed in Llandudno, Wales, with her parents, sisters and governess.

Llandudno is a bustling seaside resort about three hours from London via rail. The Liddell’s vacation home, “Penmorfa,” became a tourist attraction following the fame of Carroll’s book, and in 1965 was renovated as the Gogarth Abbey Hotel. Though the hotel was demolished amid public outcry in 2008, Llandudno continues to incorporate Alice in Wonderland-themed culture into the area. In 2013, they unveiled a new walking trail with statues and interactive technology along its 35 points of interest. Its route deliberately guides guests through town past local businesses.

Muriel and Murray Ratcliffe, long-time residents of Llandudno, installed a Rabbit Hole attraction and gift shop in 1987, featuring life-size characters in scenes from the book. In addition to purchasing the Rabbit Hole content from the Ratcliffes, the two directors of Alice in Wonderland Ltd., Barry Mortlock and Simon Burrows, have decided to revive Alice’s tale with new attractions in honor of the story’s 150th anniversary. Mortlock believes honoring Alice Liddell is important to Wales; Alice is “…a Llandudno celebrity, having graced our shores with her presence. Her story needs to be told to the world and remembered.”

These two directors aided in the remodel of several locations, such as a coffee shop, which will be Wonderland themed. In May 2012, four wooden sculptures of main characters were unveiled, as well as a giant flower clock and a bandstand. “Alice Day” was celebrated that May on what would have been her 160th birthday. It included a tea party, parade and tart-eating contest. The tradition has continued, and on May 1st, 2015, the town managed to break the Guinness World Record for the longest line of jam tarts. At 442 feet long, the line was comprised of more than 2,000 individual tarts.

As Barry Mortlock says, the story of Alice “…takes us into a different dimension; it stimulates, feeds and drives the imagination.” And it’s looking like it will for many years to come.