Up in Flames: The Magic Behind Movie Explosions

Up in Flames: The Magic Behind Movie Explosions 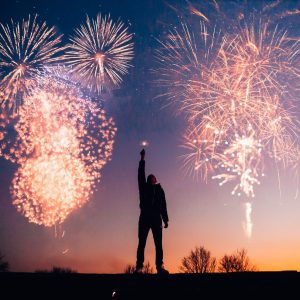 Why do we go see action movies? Is it for excellent story lines that just so happen to be supplemented by spectacular explosions? Given that the American Chemical Society (ACS), in a video from their online Reactions series, calls explosions “Hollywood’s go-to distraction from a bad plot,” the answer is probably no. Critics like to poke fun at producer Michael Bay for his reliance on pyrotechnics in his films, but his Transformers: Age of Extinction, the fourth movie in the live-action franchise, earned over $100 million dollars on its opening weekend. That doesn’t even factor in its international success.

Big explosions have often meant big money, which makes a pyrotechnician very important to an action filmmaker. When it comes to the science, making an explosion is pretty simple: It’s the result of a thermal decomposition reaction that produces high temperatures, large amounts of gas and pressure—the combination of which releases an explosion. All you really need is some fuel and an oxidizer, and you’ve got your explosion.

Of course, making an explosion and controlling it are two very different things, which is why all pyrotechnicians need to comply with safety standards set by the Bureau of Alcohol, Tobacco, Firearms and Explosives (ATF) and the National Fire Prevention Association (NFPA); licensure is usually also required, with qualifications varying from state to state. It’s also why the best pyrotechnicians can make over $100,000 a year, even if they have to carry at least $1 million in liability insurance. Money isn’t always so important, though, when every day at work is so exciting.

Marty Bresin, a pyrotechnician from Encino, California, has more than 30 years of experience in the special effects industry and recounts with glee his favorite jobs. He’s made bombs for films using material potent enough to melt pavement. He’s made fireballs by dropping charges into steel caldrons and pouring gas on top. He remembers the thrill of a successful stunt, such as when an exploded car crashed six feet from actor Spike Jonze in the 1999 movie Three Kings, demonstrating the necessity of actors to stay on their marks—a few feet off and Jonze would have been in trouble. Bresin also knows some insider tricks to certain effects. Need to film an exploding building? Just blow up the windows to create the illusion of an explosion.

Movies aren’t the only place to find spectacular pyrotechnics, as anyone who has seen the Super Bowl halftime show can attest to. Alan Grant, a pyrotechnician with special effects company Strictly FX, was one of the men responsible for Katy Perry’s special effects during Super Bowl XLIX’s halftime. Grant has plenty of experience working with musicians to make sure their concerts run smoothly, whether that means checking for flammability in hair gel or making sure no one strays into dangerous areas.

The job of a pyrotechnician is a particular one, because so many little things can go into one seemingly simple effect. But when it all goes perfectly, the results can be dazzling.

Thanks to the efforts of graphic designer Jeffery Frankenhauser, we now know that producer Michael Bay’s first nine films have a total of 992 explosions. The first three Transformers movies account for nearly 63 percent of them.