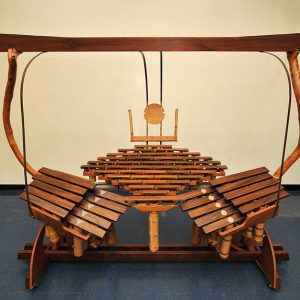 , an American musician who lived and worked during the twentieth century, has always been considered a daring composer. Partch refused to let himself be limited by conventions; when he found the conventional western tuning system and its instruments constraining, he simply created his own.

Partch’s handmade instruments use just intonation rather than the typical 12-tone equal temperament that is practiced in western music. These microtonal instruments operate on a 43-tone scale (including secondary intervals), thus producing a wide range of sounds that mimic the human voice. Some instruments are modified versions of existing instruments, like the adapted viola, while others, such as the kithara II, appear much more original. A testament to the saying that “necessity is the mother of invention,” Partch created new instruments as he discovered that he required them for his compositions.

Since Partch’s death in 1974, his former student, Danlee Mitchell, has had possession of the instruments. They were first in residence at Montclair University in New Jersey, but in November 2014, Mitchell agreed to transfer the collection across the country to the University of Washington School of Music’s Harry Partch Instrumentarium. There, the instruments are available to members of the school’s community and, to some extent, the public.

Students will learn how to play Partch’s instruments, ultimately both learning his compositions and creating their own. The university held its first public events for the instruments in May of this year. A free event in which people could learn about and view some of Partch’s instruments was followed by a ticketed performance.

At a school where creativity is absolutely vital, Partch’s collection shows budding musicians what thinking outside the box can accomplish. The instruments’ residency at the University of Washington School of Music gives many from both the university and the public the opportunity to be inspired and surprised by what they hear coming out of these handmade creations.

Barbershop quartets often utilize just intonation in order to achieve the “ringing” chord for which they are famous, also known as the “barbershop seventh.”