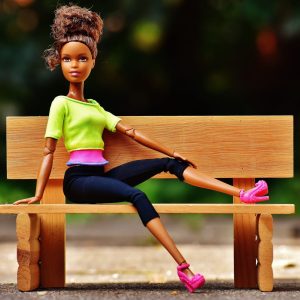 In 2009, Barbie celebrated her fiftieth birthday. She has been a veterinarian, astronaut, dentist, five-time United States presidential candidate, chef, paleontologist and Olympic gymnast. And I’m just naming a few of her careers.

Yet Barbie learned to talk only recently. A prototype of Hello Barbie was first shown at Toy Fair 2015 in New York, where Barbie displayed her speech recognition technology, made possible by Mattel, Inc., and the San Francisco startup ToyTalk. Barbie now has the ability to analyze what kids say to her and produce relevant responses. If a child mentions loving to swim or wanting to be a paleontologist when they grow up, Barbie will remember those facts and bring them up later. “The idea is they’re going into the things that kids aspire to be and the career paths Barbie represents, from scientist, mathematician, surfer, painter, writer. . . .” Oren Jacobs, CEO of ToyTalk, says. “We’ll be taking a look at Barbie and what the girls and boys who play with Barbie want to do, what they want to ask her.” As a woman who has dabbled in more than 150 different career paths, Barbie will be ready to dole out the advice.

In a statement about privacy and security, ToyTalk and Mattel assure parents that the speech system doesn’t search the open web for answers to questions posed by children. And ToyTalk is no stranger to the world of high tech and artificial intelligence. A startup based in San Francisco, the company has amassed over $31 million of funding by turning conversations with make-believe characters into a reality. They create a vast swath of mobile apps, such as SpeakaZoo and SpeakaLegend. These games allow children to converse with fantastical creatures fused with artificial intelligence.

Additionally, a similar company, Elemental Path, has launched a Kickstarter to push through CogniToys Dinos: adorable, cuddly and utterly squeezable talking dinosaurs whose souls are infused with Wi-Fi. The CogniToys Dino was made possible when Elemental Path won the IBM Watson Mobile App Developer Challenge, a global competition requiring developers to create an app with IBM’s Watson, a supercomputer with amazing cognitive capacities. As a result, CogniToys are now charged with the power of Watson. Early prototypes were printed on a 3D printer, and kid focus groups helped create a vast database of dialogues and stratified vocabulary levels. Like Barbie, the Dino tailors its conversation based on the level of interaction.

The spectacular thing about toys with artificial intelligence is that they have the ability to learn and grow as children learn and grow. Fancy terms like cognitive computing power, speech-recognition system and natural language processing referring to toys tell us that we reside very much in the “future.” We’re marching toward the era of hoverboards and time travel, with super-smart Barbies and squeezable Dinos leading the charge. If Barbie does happen to gain sentience and take over the world, at least she has the experience for global leadership, given that she served as an ambassador for world peace in 1986.

The name Siri means “beautiful woman who leads you to victory.” Dag Kittlaus, the original creator behind the iPhone’s virtual assistance technology, planned to name his daughter Siri but ended up using it for the program instead.

About the Author: Ali Dokus