The World at Their Fingertips: Exciting New Braille Technology

The World at Their Fingertips: Exciting New Braille Technology 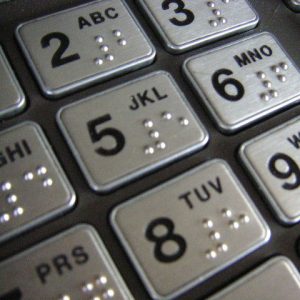 Technology is at it again, folks. Exciting new advancements in GPS and mobile phone technology for the blind and visually impaired are in development and hitting the commercial marketplace. British company OwnFone launched the world’s first Braille mobile phone in Australia this year. Unlike most cell phones on the market today, this one offers a simplified design for its target demographic, without touchscreen, text messaging or voicemail features. Instead, the phone has large buttons labeled in Braille that owners can use to dial up to three preprogrammed personalized numbers.

Previous OwnFone products include non-Braille handsets both for the elderly and for young children, featuring simple and easy-to-use “word buttons” or “image buttons,” similar in basic design to the buttons on the new Braille phone. These buttons display the names or photos of contacts for each individual user. Therefore, the buttons on each OwnFone device—on both non-Braille and Braille versions—require customization to program and display individualized contact information requested by customers. However, additional production costs involved in creating the unique Braille buttons, paired with the limited market size for such a product, made the transition from non-Braille handsets into Braille ones financially unfeasible until now.

What has allowed OwnFone to bring its Braille phone into the marketplace is more affordable 3D printing technology. In this case, OwnFone uses 3D printing to create the labels in raised Braille. Faster and more cost efficient than large-scale manufacturing, 3D printing allows OwnFone to offer this new product to consumers for the first time. Although other companies have created similar prototypes, OwnFone’s version is the first to officially go on sale. (For more information on 3D printing, take a look at one of our previous blog posts.)

Characterized by simplicity and user-friendliness, the Braille mobile phone has one-button dialing and any-key call-answering capabilities. It is approximately the size of a credit card with a reportedly long battery life; OwnFone advertises that the device’s charge can last up to a year on standby mode. Beyond the standard customizable buttons, OwnFone also offers a variety of background designs and color options from which consumers can choose.

Thus far, the phone has garnered positive responses from customers in Australia. Wayne Hawkins, disability policy advisor from the Australian Communications Consumer Action Network (ACCAN), acknowledges it as an affordable, “positive addition” to options available to the country’s blind and visually impaired population. (Mr. Hawkins is also blind, so he is in a good position to speak for the demographic.)

OwnFone isn’t the only one with ambitions to integrate Braille and technology. A freelance industrial designer named Jorge Trevino Blanco has introduced a new concept design dubbed Discover. Though still a work in progress and not on the market as of yet, this handheld navigation tool uses pin-screen impression technology to create tactile maps based on surrounding topography. Blanco’s design resembles a remote control of sorts and features a rectangular pin surface, six Braille buttons labeled Discover, City, GPS, Read, Time and Tag, and a camera on the front end used to record the user’s surroundings, which are then translated onto the pin surface. With such fascinating technologies as these in mind, one can’t help but wonder what other sorts of innovations are on the horizon to help every person achieve independence.

A 15-year-old blind student named Louis Braille designed the earliest Braille alphabet in France during the 1820s. Braille’s idea for the raised, tactile alphabet came from fellow Frenchman Charles Barbier de la Serre, a captain in Napoleon’s army, who created a sonographic dot- and dash-based code to write in the dark. Braille modified Barbier’s code, making it into a smaller, fingertip-sized version that was easy and expedient for blind individuals to decipher. By 1829, the twenty-year-old Braille published his first complete book on his innovative letter system, entitled Method of Writing Words, Music, and Plain Songs by Means of Dots, for Use by the Blind and Arranged for Them, which he later revised in 1837. Despite considerable resistance to this new alphabet during Braille’s lifetime, two years after his death, in 1854, France named his system its official communication system for the blind.