The New Wave of Electronic Learning in the Classroom

The New Wave of Electronic Learning in the Classroom 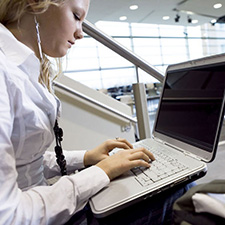 The world is constantly moving toward an overwhelmingly technological future. Every day, there is a new high-tech innovation or breakthrough—it’s rather exciting to be living in the forefront of the Information Age.

With the way technology seems to be incorporating itself into everyday life, it’s essential that schools and classrooms become more equipped with digital-based curricula and devices.

To get the ball rolling, in early March, Amplify, an independent subsidiary of Rupert Murdoch’s News Corporation, released Amplify ELA, a digital English language arts (ELA) program for grades 6, 7 and 8. This is an update to their tablet (which we covered once before) involving apps and digital content for students and teachers in grades K–12. This content features videos, games and vocabulary apps, as well as tools to allow teachers to track students and give them immediate feedback online. Teachers are also given full daily lesson plans that allow for flexibility so teachers can design their own syllabi. All of this is designed to meet Common Core State Standards (CCSS) and runs at about $45 per student per year.

McGraw Hill Education is not far behind. They have announced a partnership with StudySync, to create a cross-curricular, digital literacy source for grades 6–12. So far, the program has been used in 22,000 classrooms around the country. Not far behind Amplify, McGraw Hill and StudySync also created their products to align with CCSS and to provide options for differentiated instruction.

Scholastic Corporation also boasts its Read 180 curriculum, which consists of print and digital components that target struggling readers in all grades. Over one million students in 40,000 classrooms currently use Read 180. Recently, Scholastic announced the introduction of Common Core Code X, a new print/digital curriculum for middle-school English that is structured around the CCSS.

Understanding that our students need to be digitally literate, the government is also on board with more technology and online activity in schools. The federal government announced in 2013 the ConnectED initiative, which seeks to, within five years, connect 99 percent of American schools with high-speed wireless internet and next-generation broadband. Additionally, the FCC has pledged over $2 billion to connect 15,000 schools to the internet over the next two years.

From the private sector, companies like Adobe, Autodesk, Esri, O’Reilly Media and Prezi, among others, have made ConnectED commitments. Mostly, they are opening up software and content materials to eligible schools across the country. Other companies partnering to equip schools in need with hardware, software and wireless connectivity are Apple, AT&T, Microsoft, Sprint and Verizon.

It would seem everyone is getting on board with promoting more internet and digital materials in schools. With the power of technology rising every day, it is clear that American students need to be taught technology literacy as soon as possible. Soon, many more jobs will require at least some computer knowledge, and it is probably best to give our students an education based on technology now, so they can succeed in the future.

Net neutrality, or the concept of an “open internet” where no particular data is prioritized over other particular data, came under fire in April as the FCC decided to back the “fast lane” for web trafficking. This means the FCC could allow larger streaming content providers like Disney, Google and Netflix to pay internet service providers (ISPs) such as Comcast and Verizon for faster internet speeds for streamed content, while smaller companies might have to suffer with slower speeds unless they also pay. This could mean the end for small ISPs; if they cannot afford to pay for faster internet speeds for their customers, customers may get frustrated and switch to a larger provider. For content providers, it could mean larger content providers might pass the expense on to their customers; but it could also encourage customers to switch to smaller content providers if that happens.

About the Author: Elizabeth Rule

Elizabeth Rule was a 2014 Summer intern.