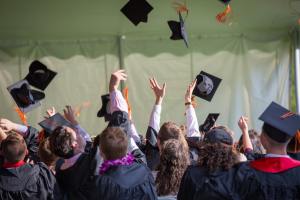 As a senior expecting to graduate in December, there’s been one question that most people have been asking me: What are you going to do after you graduate? A few years ago, the answer would have been to look for a good job. Not many people continued school after their bachelors, the notable exceptions those going on to medical or law school. These days, however, it seems like a “good candidate” for almost any job needs a master’s degree just to be competitive. Whereas once a high school diploma was usually not enough to be considered for a good job, now a bachelor’s degree is becoming less and less impressive by itself on a resume. Master’s degrees are becoming a necessity in order to stand out.

Today, it’s not uncommon for college graduates – including about 75% of my Emerson College classmates – to be forced to move back in with their parents after graduating and work minimum-wage jobs in their hometowns. According to Richard K. Vedder, professor of economics at Ohio University, unless you’ve graduated from an Ivy League school or an equally prestigious university, then you’ll probably need to get a master’s degree to stand out to potential employers.

The days of going back to school after a few years of work seem to be over. Now, earning a master’s degree is done immediately after your bachelor’s. And employers have become so selective about the people they hire that universities are forced to create programs so unique that it seems ludicrous to believe that they’re real. Recently, a friend was talking about getting an MS in Skeletal and Dental Bioarchaeology or an MA in Learning and Thinking. I hadn’t heard of either one until now.

Will we reach a place where all graduates hold master’s degrees in addition to bachelor’s degrees? Even now, companies like Welch Allyn receive so many resumes from people who have a master’s that they’re able to make a first cut based solely on that and eliminate about half of the candidates.

It also prompts me to ask another question: When will the PhD become the new master’s?