The Masterpieces at the MFA: Timeless Treasures or Cash Cows?

The Masterpieces at the MFA: Timeless Treasures or Cash Cows? 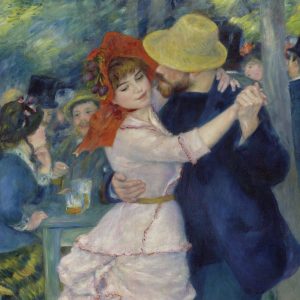 A museum is traditionally thought of as a meditative setting, an island of hush in a cacophonous world of ceaseless tumult. When I think about the last time I visited the Museum of Fine Arts in Boston—or the MFA, as it is commonly called—I can remember the ambiance of the dimly lit blue exhibit room as clearly as I can remember the art itself. But what goes on behind the scenes at museums like the MFA is far from quiet and calm. In fact, it’s been messy, and it’s getting even messier.

The MFA’s policy regarding loans of masterpieces to other museums goes far beyond the usual lending practices. For example, the museum’s most famous Renoir, Dance at Bougival, is a work that many out-of-towners and tourists aim to see. But in the last few years, it has been frequently absent, touring from Japan to Italy and back to Japan. A period of 17 months of absence from the MFA, consisting of transportation to and from more than seven cities, is not exactly what art historians might call sensible or safe. A contributor to the Berkshire Fine Arts (BFA) website refers to the process as the MFA “pimp[ing] its masterpieces.”

The MFA’ Monet paintings have also been racking up the frequent flyer miles. Of the 37 works, 10 were loaned for more than three solid years between 2006 and 2013. Most of the other 27 have been globe-trotting, too. The Boston Globe claims it has “been unable to find another major American museum renting out so many of its most prestigious works of art so frequently.”

Margaret Koerner is an art historian and former trustee who chose to depart the MFA’s board of trustees. She notes: “Our primary responsibility as trustees is to safeguard the art. If these works are placed at risk too often and without sufficient justification, then we are not fulfilling that obligation.”

So when do the risks outweigh the benefits? And by risks, I mean possible elbows through masterpieces, insects and termites, warping due to humidity and so on.

James Cuno, president and CEO of the James Paul Getty Trust located in Los Angeles, agrees with Koerner: “There are always risks to the integrity of a work of art when it is taken down, crated, shipped, uncrated and installed. And those risks should never be minimized. They should only be undertaken for extraordinary reasons.”

On the flip side of the coin, some argue that loaning and shipping fragile art to generate revenue is more common than ever—despite the risk of off-putting potential art donors—and is not limited to the MFA. They also argue that the risks of transportation are just not great enough to prevent important art from being shared around the world.

Eli Broad, a philanthropist and art collector, spoke of his disappointment regarding non-displayed treasures. “If 90 percent of your work is in storage, you need to begin lending it to other institutions.” He continued by urging museums to “get art out of the basement.” This generated some response, as it is not quite as easy as he makes it sound. Museum curators do need to get revenue for their installations, so, naturally, the blockbuster pieces are the ones chosen to make the journeys in order to earn the greatest revenue. And for pieces that don’t draw as many visitors, it is certainly easier and safer to keep them “in the basement.”

But not all museums are willing to loan out their most salient works. Director of Communications Margaret Doyle at the Museum of Modern Art (MoMA) in New York City, and Thomas Campbell, director and CEO of the Metropolitan Museum of Art (the Met), also in New York, both confirmed they have key works they do not send out—for any price. Campbell states, “Lending exhibitions for fees is categorically not part of our business model.”

ArtWatch International, Inc. discusses art as “big business and a gigantic attraction. If the blockbuster is sensational enough, everyone seems to benefit; that is, except the artworks.”

The controversy continues as curators, historians, philanthropists, collectors, admirers and many others join the discourse. What are the side effects of treating our masterpieces like cash cows? Is it worth the transportation risk? What are the ethical repercussions of “pimping out” masterpieces? Is it more about generating revenue or sharing the enrichment bestowed upon the human race by timeless treasures?

One of the oldest museums ever discovered was located in the ancient city of Ur. Nabonidus, the last king of the Neo-Babylonian Empire, was known to collect antiques. His daughter, a priestess, ran a school that also contained a small museum kept for educational purposes. The site has been dated back to 530 BCE.