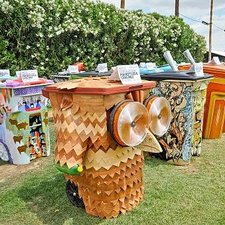 Where I come from in Millbrook, Alabama, people don’t recycle. The nearest recycling center is a 30-minute drive down the highway to Montgomery. But in Tacony, Philadelphia, the opposite is happening—recycling is being taken to an entirely new level.

There, artists are showing what happens when trash is treasured at a recycling center called Revolution Recovery, one of the few recycling plants to allow access to the materials it processes. The project is called Recycled Artist in Residency (RAIR), and its creators, Fern Gookin, Avi Golen and Billy Dufala, have built a 1,000-square-foot residency inside the recycling warehouse with the aid of grant money from Philadelphia’s Creative Industry workforce campaign. Similar to other artist-in-residence programs, RAIR gives artists the opportunity to work away from their usual settings for one to three months or two to four weekends. RAIR offers unique studios and workspaces for working with wood, metal and other recycled materials. Its goal? To encourage others to use materials from the waste stream while raising awareness about how much truly goes into it.

To this end, RAIR allows its artists-in-residence to experiment to their hearts content with approximately 400 tons of free materials. So far, they’ve been used in various projects by sculptors, filmmakers, photographers and printmakers. Some of these projects have been playful, such as when Mary Ellen Carroll and Billy Dufala built an amphitheater out of discarded metal and held an audience-less concert where she and other musicians made music with even more metal objects. Others, such as current artist-in-residence Martha McDonald, use the residency space to ponder provocative questions about the place of trash in everyday life. Her most recent installation, Songs of Memory and Forgetting, uses trash to evoke the memories present in the belongings that litter the dump.

These sorts of ideas continue to be a large part of what RAIR is all about. As the program continues, its links to sustainability initiatives will only become stronger. “One of our goals for 2016 is to get people here to see the trash because you don’t understand the scope until you see it,” says Lucia Thomé, the program’s coordinator. “In the next couple of years we are hoping to bolster our exhibition component and bring visibility to what can happen at RAIR to the public.”

Individuals who would like to apply to the project may do so in the fall, when RAIR opens its doors to new artists again.

You can find art made of trash in museums! In the Smithsonian Art Museum, there is a sculpture titled The Throne of the Third Heaven of the Nations’ Millennium General Assembly. It was created over the course of more than 14 years by James Hampton, a former custodian, who used discarded materials and objects he scrounged up. The sculpture was found in his garage after his death in 1964.

About the Author: Christian Gibbons

Christian Gibbons was a 2016 Summer intern.