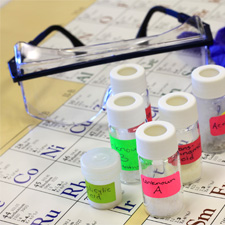 When I was a kid, the best days in school were always the days we would build something in science class. I still remember the day we learned about solids and liquids by making Oobleck, a non-Newtonian fluid. The concoction was a cornstarch-and-water mix that was a solid when you rolled the mess in between your hands but turned into a liquid as soon as you stopped rolling. While this was a fun experiment, students across the nation seem to be lacking in such memorable experiences, as many are still not as interested in science and math subjects as some would like. It seems like there has always been a push to get students more interested in studying math and science in schools.

Enter the Sara E. Goode STEM Academy, a school in Chicago that uses STEM (science, technology, engineering and math) fields as the main focus. But the Sara E. Goode STEM Academy takes it further than this: Their students not only graduate after six (instead of the traditional four) years of school with a high school diploma, but also an associate’s degree and the promise of a job with IBM. The company is the school’s corporate sponsor and helps to create the school curriculum so that the students are being taught exactly what they need to know to succeed in a job with IBM as well as in other STEM jobs. While this may seem like a unique concept, it is not the only school that operates this way.

P-TECH, or Pathways in Technology Early College High School, is a STEM Pathways to College and Careers (STEM-PCC) school that offers education from grades 9 through 14. The six-year high school in Brooklyn partners with the New York City Department of Education, the City University of New York (CUNY), the New York City College of Technology (City Tech) and IBM. Like the Sarah E. Goode STEM Academy, P-TECH allows its students to graduate with an associate’s degree, which helps them get their foot in the door for STEM jobs, whether at IBM or elsewhere. STEM jobs are high in demand right now, which means that graduates with STEM degrees are also in high demand. In a 2011 brief by the US Department of Commerce Economics and Statistics Administration [PDF download], people with STEM jobs were shown as having made more money than their fellow workers in non-STEM-related jobs. Those who had graduated college with degrees in STEM majors were shown as having made more money even if they were not working in a STEM field.

The demand in STEM jobs, and the seemingly secure job market in STEM jobs, has many people, such as the people behind schools like Sara E. Goode and P-TECH, turning to focus more heavily on STEM subjects in school. Many grade schools, not just high schools, are coming up with interesting and innovative ways to get young students excited about STEM subjects. For example, the Northfield Community School in New Jersey is doing some amazing STEM work with their students like teaching computer coding to second graders.

CoderDojo, founded in 2011, is an open source, not-for-profit program in over thirty countries where kids as young as five are being taught computer coding. Bill Liao, a philanthropist and entrepreneur who wears several other hats, and James Whelton, who was just 17 when he became the first person to hack an iPod Nano, founded the program with the intention of getting kids excited about learning computer code outside of a classroom setting. Liao said that he wants the clubs to be a sociable place for kids to learn and have fun, where the only rule is to “be cool.”

The kids who attend CoderDojo clubs start out learning basic programs like Scratch but can later move on to more complex back-end coding on the game Minecraft. One participant of CoderDojo even created his own app and was named the world’s youngest Mac app developer. The program is run by volunteers who have a working knowledge of of Java, HTML and CSS, and want to encourage young people to get excited about programming.