Solving the Puzzle of the Antikythera Mechanism

Solving the Puzzle of the Antikythera Mechanism 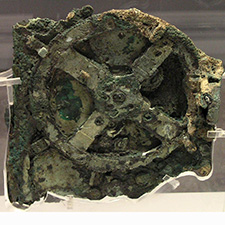 Did you know a device considered by scholars to be the world’s oldest analog computer was created over 2,000 years ago? The device is officially named the Antikythera (ante-kith-er-uh) Mechanism. It was retrieved from an ancient shipwreck discovered in 1901 off the coast of the Greek island of Antikythera. The ship is believed to be a merchant vessel that met its end around 60 BCE while carrying a load of valuable cargo. Divers extracted a range of ancient treasure, including ceramic bowls and life-size statues, but the mysterious Antikythera Mechanism went unstudied for years. Recently, new discoveries have been made about the function of this device, causing scientists and historians to change the way we perceive ancient history.

Researchers have estimated that the Antikythera Mechanism was created around 205 BCE. The original find was a shoebox-sized chunk of bronze, but about 80 additional fragmented pieces have been discovered so far. Scientists believe the original technological device was housed in a wooden box and operated by a hand crank, and included more than 30 interlocking bronze gears and dials.

The device is currently being studied by the Antikythera Mechanism Research Project (AMRP), an international academic research group dedicated to unlocking the device’s mysteries. The team consists of astronomers, mathematicians, physicists, historians and other experts. Since the project began, advanced technology has provided new answers. According to the team, “the Antikythera Mechanism is now understood to be dedicated to astronomical phenomena and operates as a complex mechanical ‘computer’ which tracks the cycles of the solar system.”

In 2008 researchers published findings in Nature revealing that the mechanism linked astronomical calendars to calendar systems that regulated ancient Greece, such as the Olympiad, used to predict the four-year cycle of the Olympic Games. The device also tracked a calendar specific to a region in northwest Greece—indicating a possible locale for its invention—based on dial inscriptions of months used in that specific calendar system. Some of the dials also calculated the positions of the sun and the moon, predicting solar and lunar eclipses.

More recent findings were published last year by Christián C. Carman of Argentina’s National University of Quilmes and James Evans of the University of Puget Sound in Washington, who estimated a more accurate origin date and found that the device’s technology is based not on ancient Greek trigonometry, but on borrowed Babylonian arithmetic. This discovery could completely change our perception of the evolution of mathematics and astronomy.

The AMRP team continues to work tirelessly to uncover the mystery of the Antikythera Mechanism. A new systematic exploration of the shipwreck began in the fall of 2013, and another is planned for 2015, with the potential of discovering more clues. Additionally, researchers are developing working replicas of the device to add to the many other solid models and virtual representations of how the mechanism presumably worked. We can’t wait to find out what the team discovers next!

Kyniska, daughter of King Archidamos of Sparta, broke the tradition that forbade women from participating in the ancient Olympic Games. Kyniska’s chariot won the four-horse chariot race in 396 BCE. Since the horse’s owner, not its rider, was considered the winner, Kyniska was named the official victor—a first for women.