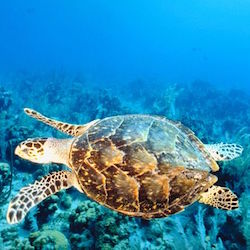 Seven feet long and 665 pounds—that was the size of just one leatherback turtle saved by the Mass Audubon Sanctuary and the International Fund for Animal Welfare. And while that sounds like a massive turtle (and it is), realize that, at the time of rescue, it was underweight and near death. Thankfully, during the turtle’s brief stay at a New England Aquarium facility, aquarium vets, biologists and volunteers all rehabilitated the turtle back to a healthy state, before returning him to the same ocean he was rescued from. And I know you may be asking, “Wait, wasn’t the whole point of the rescue to, well, rescue said turtle from the ocean and keep him in the aquarium for a life of maintained temperatures and regulated diets?” Well, it turns out, leatherbacks and aquariums are not meant for one another due to the creature’s massive size, the fact that its diet consists of jellyfish and the turtle’s constant swimming into tank walls. So he was returned to the ocean to give him the best chance of survival. And while this story of saving one leatherback is quite amazing, it’s really just one of many amazing stories of sea turtle rescue in New England.

Every year biologists and volunteers work together to save endangered sea turtles stranded on Cape Cod beaches in Massachusetts. Just like the leatherback, these turtles are rehabilitated and released back into the ocean. On average, volunteers from the Massachusetts Audubon Society rescue 90 turtles each year. These turtles come to the vets at the New England Aquarium with hypothermia, severe dehydration, pneumonia and shell or bone fractures. Because of the severity of their injuries and ailments, their treatment can last for several months to two years. This sounds like a long time, but it’s worth it, as the aquarium does a fantastic job of saving these creatures. Over 90 percent of the turtles that come to the aquarium survive and are released back into the ocean. Due to their massive success rate, the aquarium has been nicknamed “Sea Turtle Hospital.”

While the New England Aquarium has a talented in-house staff to find and rehabilitate these ailing turtles, they would be nowhere without the volunteers who help out in the rescue. Just think, if there were only a quarter of the people currently combing Cape Cod beaches for these helpless turtles, how many turtles would be saved? So to keep the community as involved as possible with these efforts, the New England Aquarium has started a marine conservation action fund that aims to “protect and promote ocean biodiversity through funding small-scale, time-sensitive, community programs.” With this program, they hope to not only keep up their current rate of turtle saving, but to increase it.

Did You Know?
Some rescued sea turtles are tagged before being released back into the ocean. This tagging shows that the sea turtle has survived and where it has gone since its release. For example, the aquarium knows that Goose the green sea turtle traveled 8,310 miles after release.

About the Author: Duncan McCay

Duncan McCay was a 2016 Spring intern.