PSG Has Dinner with History

PSG Has Dinner with History 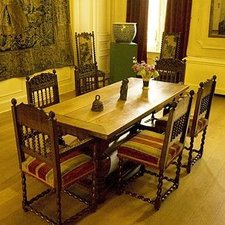 If you could have dinner with one person from history, who would you choose?

For me, that person is Ray Bradbury—famed science fiction author of several short stories and novels, including Fahrenheit 451. I love all his works and credit him for inspiring my own writing. In high school, while writing a paper on Bradbury, I decided to write him a letter expressing my gratitude. Unfortunately, before I could finish writing it, he passed away. If I had the chance to time travel, I would make sure to tell Ray Bradbury how much his work meant to me.

When I asked the staff at PSG whom they would meet if given the same chance to time travel, everyone had wildly different answers. But most, like me, chose an idolized dinner guest from an earlier age.

Eileen would have dinner with her longtime hero, Kurt Cobain, and has also always wanted to visit his home. Tess would love to talk to Audrey Hepburn about her glamorous Hollywood life, her active role in WWII helping out the Dutch resistance and her later work with UNICEF. Moeko, a fellow intern, gained an appreciation for Buddhist philosophy during a course on Asian religion at Swarthmore College, so she would love to sit down with Buddha. Alyssa couldn’t pick just one person from history—she’s tied between Madeleine L’Engle, one of her favorite authors, and Queen Elizabeth I. Kate says she would have ”a million questions” for Laura Ingalls Wilder—both about her books and her time living through most of America’s formative years from Westward Expansion to WWI to the 1920s. Kate is actually relieved a dinner with Wilder remains impossible because she ”wouldn’t know where to start” in a conversation with her idol!

Some PSG staff members, however, picked people who are still alive to have dinner with—so a meeting could actually happen!

Ken, who has always cited music as a vital part of his life, would have dinner with singer-songwriter James Taylor. He would love to learn what inspires Taylor’s writing and when Taylor realized he had special talent. For Tanya, Harry Potter was an “important staple” in her childhood—it makes perfect sense that her dinner guest pick is J. K. Rowling.

To make all of our ideal dinner dreams come true, all we need are some friends in high places—that, and a time machine.

The hut of Captain Robert Falcon Scott, abandoned in 1912 when Scott and his crew died on an expedition, still sits near the South Pole in Antarctica. Containing frozen butter, ketchup and more than 8,000 additional artifacts, the hut is virtually a time machine to the last moment Scott and his crew spent there over a century ago.