Kids are Rising to the Occasion . . . on Hovercrafts

Kids are Rising to the Occasion . . . on Hovercrafts 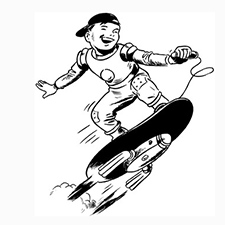 The year is finally 2015. Do you know what that means? By October, hoverboards are supposed to be available to the general public, at least according to the 1989 movie Back to the Future II. I’ve been looking forward to this year since first saw the movie, but I’ve been told time and again that it’s impossible for various reasons, including the fact that you just can’t create antigravity technology. But what about the hovercraft, a more attainable version of the hoverboard?

Impossible, right? Well, maybe not. After building a hovercraft for the Discovery Channel show Mythbusters, one of the hosts, Adam Savage, made one at home with his kids. Savage lays out a step-by-step procedure, making it seem pretty easy if you have plywood, a leaf blower and a shower curtain lying around. But he’s still one of the Mythbusters guys—they can build anything—and so I was still doubtful. Are these possible for a normal person to build? And how do they even work?

As it turns out, even young kids can build hovercrafts. On the PBS kids’ show DragonflyTV, Rachel and Sara, both around the age of ten, spend an episode experimenting with the best ways to optimize the hovercraft experiment. A typical hovercraft design has a sturdy fabric called a skirt attached to the bottom of a flat platform, usually a round piece of wood. A piece of equipment having a fan of some sort, such as a leaf blower, blows air between the skirt and the platform. Air slowly leaks from the skirt, which creates a cushion of air between the platform and the ground. Rachel and Sara played with the skirt to enhance the speed and navigation of their hovercraft. They found that a tighter skirt makes the air leak out faster than a baggier skirt, which actually makes the hovercraft slower and more difficult to maneuver.

It’s not just TV stars making hovercrafts, though. In February, hundreds of kids attended the third annual Introduce a Girl to Engineering Day at St. Ambrose University in Davenport, Indiana. The purpose of the event was to encourage girls ages 3–13 to get excited about science and engineering. Attendees could go through a series of booths and learn how to create slime, work with 3D printing and, yes, make hovercrafts. This is just one of the many science-oriented fairs for kids that includes building hovercrafts as one of the activities. Not only are hovercrafts possible, but they’re also easy and fun to make, which is much better than waiting around for Marty McFly’s hoverboard.

At the company Arx Pax, engineers have developed a technology that allows the board to magnetize the surface below it. The subsequent polarizing magnetic field forces the board to hover. However, the technology only works on aluminum or copper surfaces, meaning if we wanted to ride around everywhere like Marty McFly, we’d need new aluminum streets or copper sidewalks.