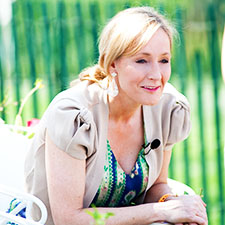 If you’re not a mystery lover or a shelf browser who gives new authors a try, would you purchase a debut mystery novel from an author named Robert Galbraith? Would you even pick it up to browse? What if it turned out that this new author, supposedly a former member of the Royal Military Police, was actually the beloved J. K. Rowling?

In what was called “the best act of literary deception since Stephen King was outed as Richard Bachman back in the 1980s,” the discovery that the creator of Harry Potter had published The Cuckoo’s Calling under a different name back in April 2013 shocked fans, publishers and booksellers alike.

For a debut novel in a specific genre, sales of The Cuckoo’s Calling were respectable at approximately 1500 copies. After the news of the author’s identity broke, however, getting ahold of a first edition copy proved near impossible within a very short window of time. With physical copies so high in demand, many fans were turning to the ebook version, a necessity that allowed sales of the Amazon Kindle version to increase 158,000 percent in less than a 48-hour period. The hardcover sales also made the title an almost instantaneous bestseller for lists reported by both Amazon and Barnes & Noble.

Preorders for the reprint of the novel were widespread, although the new copies contained an addendum about J. K. Rowling’s pseudonym, making the original printing rare and worth far more than the newer editions. The book was originally intended as a series. Rowling continued with that plan, releasing the sequel The Silkworm, in 2014. Though her cover was blown, the novel was still published under the name of Robert Galbraith.

However, in an attempt to turn a disappointing situation into a celebration, Rowling decided to donate 100 percent of the settlement—or a “substantial donation,” as she’s calling it—from her lawsuit against the firm responsible for blowing her cover, as well as the net royalties from the book sales, to charity. In tribute to Galbraith’s faux military background, Rowling has selected The Soldier’s Charity to receive this major contribution. Over a span of three years, the charity will receive every penny of the royalties intended for the author, beginning with sales dating from July 14th, the day Galbraith’s true identity was revealed.

When the sales numbers pre- and post-reveal are compared, the wonders of the publishing industry are revealed. Rowling’s decision (as well as the decisions of King and countless others) to use a pseudonym displays just how much hype a name can create, a phenomenon that must affect the author’s idea of self-identity: Is Rowling a writer or a celebrity? The pseudonym certainly gave her a reminder of the difficulties of entering into the publishing world, and a glimpse at the realities of a new author’s struggle to succeed in the market despite good reviews.

In other circumstances, would The Cuckoo’s Calling ever have realistically earned a sequel . . . a series? We will never know. One thing for certain is that Rowling is blessed with a built-in audience, confirmed merely by the preorders for the novel’s reprint and presumably in the sales that will follow. How she morphed from a no-name author trying to sell a book about a young wizard to an international bestseller is one of the unanswerable questions of publishing. It’s that magic touch that all first-time authors hope they possess: the ability to capture an audience large enough to prevent them from remaining a needle in a haystack. A magic thousands may have never known existed between the covers bearing the unheard-of name Robert Galbraith.

Did You Know?
It’s not the end for the Harry Potter saga. Sometime in summer 2016, Harry Potter and the Cursed Child will be hitting the London stage. Rowling made the announcement via Twitter on June 26, 2015. Tickets go on sale this fall.

About the Author: Kate Carroll

Kate is a Copyeditor at PSG. She is very good at British impressions (especially Downton Abbey characters), and sometimes the accents sneak into her conversations! She loves fiction and classic authors. She could reread The Age of Innocence, Wuthering Heights, and the Harry Potter series repeatedly.