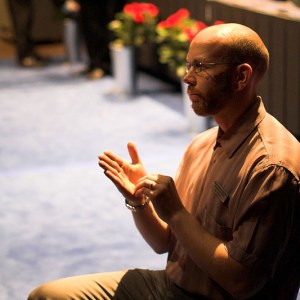 On a hot summer day last year, I was stuck in the middle of a party supplies shop in Barcelona. I had exchanged smiles with a small girl in the shop, and now she wanted to become friends. I wanted to, too. The problem was that I couldn’t speak her language, and she couldn’t speak mine. After a long, awkward conversation of hand gestures, we were able to learn each other’s names, but I remember wishing I could speak even a little of her language—or that I had a translating app. Body movement goes a long way, but shared language is an important component of communication.

Two undergraduate students at the University of Washington came to the same conclusion, but they took matters into their own hands. With the firm belief that language is a fundamental human right, rising juniors Thomas Pryor and Navid Azodi created gloves that aim to break barriers between sign language and verbal language.

The gloves are called SignAloud, and they translate American Sign Language into text and speech. Each glove has sensors on the hands and wrist that measure hand position and movement. The gloves wirelessly send the signs to a main computer, which translates them into words or phrases. These are then immediately delivered back to the gloves, which are equipped with a speaker to transmit the audio translation of the signs. The current renditions of the gloves are still prototypes, but the two students are working with more people in the deaf community to help refine the gloves for wider use.

In the United States, American Sign Language is used by hundreds of thousands of deaf people as their first language, and by many more people who learn it as a second language. The demand for smoother communication is immense.

”Everyone should be able to communicate with everyone else,” Pryor said, explaining his and Azodi’s philosophy behind the gloves. “When we were talking about things being accessible and connecting people and making that impact we found that language and communication was the piece that holds it all together,” Azodi added. While translation apps continue to knock down barriers between verbal languages, those who communicate by hand can be alienated from others who communicate verbally. Through their innovative gloves, Pryor and Azodi hope to create a more unified global community.

Just like spoken language, sign language varies widely among countries and cultures, each with its own grammar and dialects. The Ethnologue, a website that catalogues more than 7,000 living languages, lists 141 sign languages from around the world.

About the Author: Moeko Noda