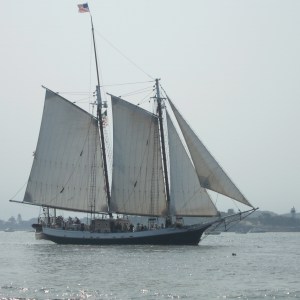 Growing up in Gloucester, Massachusetts, I learned all about my hometown’s rich maritime history from a very young age. Known as “America’s Oldest Seaport,” Gloucester was founded in 1623 and has always been deeply entwined with the ocean that surrounds it. One of my favorite summer events, the Gloucester Schooner Festival, brings some of that history to life right before your eyes, and has been doing so for over 30 years!

Every Labor Day weekend, dozens of schooners converge on Gloucester to take part in the festival. The highlight for me is watching from Stacy Boulevard on Sunday morning as each schooner emerges onto Gloucester Harbor under full sail—if the winds are blowing—and takes part in the annual Parade of Sail. The schooners sail through the harbor on their way to the Mayor’s Race, which starts off of Eastern Point. As I watch these giants sail by, their crew working hard on the decks, I can’t shake the feeling that I’m watching history glide past on the sparkling water. Cannons boom, my daughters cover their ears, and I capture the scene on my camera.

If it isn’t enough to just watch the schooners, you can set sail on the ocean yourself! Gloucester’s own 65-foot schooner, the Thomas E. Lannon, offers two-hour sails throughout the summer. All aboard!