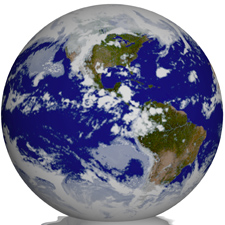 The National Center for Education Statistics (NCES) published the 2010 results of the geography portion of their National Assessment of Educational Progress (NAEP) given to fourth, eighth and twelfth graders. The results revealed that nearly 30 percent of tested students were below the Basic knowledge level. The NAEP defines the Basic achievement level as “partial mastery of the knowledge and skills fundamental for proficient work at each grade.” In comparison to 2001 and 1994, the average score in geography has either stayed about the same or slightly increased across grades, but it is the number of students who tested below Basic that is worrisome. The results have illuminated the fact that many young Americans are unable to effectively read, interpret and design maps, graphs or other materials having environmental information.

Educational initiatives implemented in the last few decades often do little to encourage schools across the United States to focus on geography specifically. For example, the federally sponsored No Child Left Behind Act (NCLB) of 2001 allocated millions of dollars to fund language arts, math and science, civics and the arts, and the study of economics. The subject of geography, however, received no federal funding.

As a result of these figures, the National Geographic Society has teamed up with the United States Geospatial Intelligence Foundation (USGIF), CH2M Hill and Esri to found the Geo-Literacy Coalition. The coalition hopes to not only instill an understanding of geography in students across the United States but also to enlighten students about their positions in the global community.

According to the National Geographic Society, geo-literacy is “the understanding of Earth systems and interconnections that we all need to make good decisions.” In other words, we are all connected on a global scale and therefore our actions have an impact on the world. It is important for students to realize their existence in relation to the rest of the world. This type of knowledge can help students to make informed life decisions such as where they want to live, which products they want/need to buy or how they want to get from place to place.

The first step to implementing this type of global thinking into the classroom is through discussion. There are plenty of examples that represent the impact our actions have on our fellow citizens. Take, for example, the concept of acid rain. In the 1980s, scientists discovered that pollution created in the Midwest from power plants was traveling to New England and causing acid rain. This pollution caused an increase in the acidity of some of New England’s streams, soil and trees. Students can use examples such as this one to analyze the impact our decisions can have at local, national and global levels.

Geo-literacy and global literacy are two movements that aim to increase the knowledge of children and adults.

Geo-literacy, as mentioned above, is a current movement that encourages more geography instruction in schools in hopes that this knowledge will inspire students to make better decisions and understand that the decisions that they make affect others.

Global literacy is a worldwide effort to try and increase literacy rates among people in poverty-stricken countries around the world. Currently, almost 800 million people do not know how to read or write. Organizations like the World Literacy Foundation try and combat illiteracy by raising money to provide students and teachers with the tools they need for reading and writing. These tools include books, testing materials and technology. To help support their efforts, you can donate, become a partner or even “like” the World Literacy Foundation on Facebook.

About the Author: Liz Canon