Beyond Baby Babble (and a Special Announcement!)

Beyond Baby Babble (and a Special Announcement!) 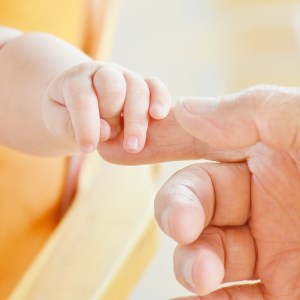 When my son Gabriel was nearly a year old, I was taking a swim class with him at the YMCA. I was hopeful it would have two benefits: getting us out of the house for a few hours and making some new friends. While we accomplished the first, it turns out that wrestling a baby into a swimsuit, floating around singing “Twinkle Twinkle Little Star,” and trying to dry and dress a slippery little monkey and myself is not conducive to meeting new people. On our very last day, another mother in the class said the same thing about how she had hoped to make new friends. I immediately chimed in that we could be friends, and we exchanged cell phone numbers.

We soon met up for Mother Goose story time at the local library, and that’s where my new friend mentioned that she and her daughter were taking a baby sign language class. They loved it and were planning to sign up for the next session, and so I decided we would, too.

The first class we went to was in the fall of 2012 when Gabe was 14 months old. There were about a dozen kids, ranging from four months to 24 months old, in the class. Andy (my husband), Gabe and I sat in a circle with the others and sang a welcome song as the teacher cheerfully introduced the signs that went along with it. One thing I particularly liked about this class was that we used American Sign Language (ASL), not modified signs designed for babies. This was important to me, since ASL is an internationally recognized language and should be treated with respect.

While it was understood that the children in the class might not have the fine motor skills to do a particular sign exactly right, it was stressed that parents should demonstrate the sign properly. One common example of this is the sign for “more,” which is done by tapping the fingers of both hands together with thumbs tucked behind and palms facing in. Often, children will clap two fists together or point with their index finger to the palm of their other hand. Parents shouldn’t try to fix this but should be sure to do the sign correctly, similar to how they would say “ice cream” even while their child begs for “ice cweam.”

The class met weekly, and each week had a different theme with signs, songs and stories related to it. The class also had a routine, which helped make it feel familiar to the children. We would sing and sign the welcome song; learn new signs, always accompanied with toys and songs; learn the sign for that week’s color; play with a giant colorful parachute while singing a color song; sing the ABCs and some counting songs while the parents practiced the signs for letters and numbers; have story time; and finish off with a bubble song and bubbles. The sign for “more” was often used during this last part!

Oftentimes during the class, it would seem like Gabriel wasn’t paying attention, but then a few days later, he would ask for milk or a banana while doing the sign. We also had fun playing a game where Andy and I would make the sign for an animal, and Gabe would tell us what the animal was. Later, when we realized Gabriel didn’t know his colors that well and said that everything was red, in addition to talking and reading books about colors, we also bought him a color-focused Baby Signing Time DVD. Before long, he had the colors down.

There have been lots of articles about the benefits of baby sign language, even as far back as a New York Times article from 2004. While I took the class mostly as something fun to do with my son, others in the article (and in my class!) teach sign language to their baby in order to help them communicate earlier and to cut down on the frustration that happens when a child can’t express him- or herself clearly.

As recently as 2013, there was an article in The Washington Post about the continuing popularity of signing with babies. This article discusses how some proponents of baby signing believe that sign language “promotes brain development and parent–infant bonding.” Eileen Ladino, a teacher who works with deaf and hard-of-hearing students, teaches parents and babies sign language on weekends. She discusses how she believes sign language can help preverbal babies and toddlers express themselves in ways beyond their basic needs. She then mentions two jokes her 13-month-old daughter made: signing “snakes” over a plate of spaghetti and signing “bath” after dunking a cookie in a cup of water.

In its “Infant and Toddler Health” section, the Mayo Clinic notes that further research is needed to determine if baby sign language promotes advanced language, literacy or cognition; however, the clinic also states that baby sign language is an effective communication tool, and that it can be a fun opportunity for bonding with your child. They also offer some tips on successful baby sign language, including setting realistic expectations (While you can certainly start signing with your baby from birth the same way you start talking to him or her, don’t expect your baby to sign back until about 8 months of age.) and keeping the signs simple (Choose a few signs that are important to your baby’s life, such as “milk,” “mother” and “father.”).

Whether you try it for fun or for other benefits, signing with your kids can be a great experience. It certainly left me and my family wanting “more!”

PSG is happy to announce the arrival of Amara Matthew Marie Trossello. Annette and Andy’s daughter was born Saturday, May 31 at 10:21 a.m., weighed 10 lbs 1 oz, and was 21.75 inches long. Mom and baby are both doing well!

About the Author: Annette Cinelli Trossello

Annette is a Senior Editor and Project Manager at PSG. She likes to spend her free time in libraries, parks or museums with her children and husband. Once the kids are asleep, she loves to curl up with a good book. She is currently working on an original screenplay!