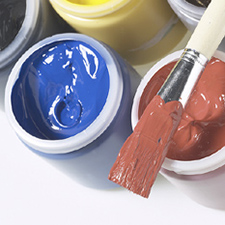 Whenever I make a pilgrimage to the Boston Museum of Fine Arts (MFA), I don’t necessarily expect to be entertained. Enlightened on art and history? Sure. But I don’t plan on having a laugh over a brushstroke in a Renoir. When I recently stepped into the Edward H. Linde Gallery, however, I was met by colors and sounds that could only come from the vibrancy of a child’s perspective. Through the Community Arts Initiative, kids from eight Boston–area community programs collaborated with local artist Jake Fried on a series of four stop–motion films. The exhibit, titled Experiments In Animation, has been on display since May 2014 and will continue through October 13, 2014.

The stop–motion films were inspired by the MFA collection and include the work of approximately 100 students representing the different Boys & Girls Clubs throughout Boston as well as the Boston Chinatown Neighborhood Center (BCNC) and United South End Settlements (USES). Each clubhouse made a film that reflected on and characterized the people and places important to its community. Not only did the project allow students to learn more about the MFA collection and video art, it also gave them an opportunity to expand their own art skills. The films were made using drawings, flip–books, gouache (an opaque variation of watercolor paint), Claymation and paper cutouts.

At the exhibit, a selection of drawings from each film was on display between each of the monitors. The figurines used in the Claymatian video were also on display, enclosed within protective rectangular glass. The Claymatian film featured a backdrop of upbeat dance music and was peppered with the sound of children’s voices and the occasional roar, laughter or dialogue. Some of my favorite figurines included a flying dragon, a sword–fighting cheeseburger and a mustached banana. (The latter two even made me laugh.) Pairs of headphones were connected to the monitor, so my viewing experience was shared with another museum–goer who couldn’t have been any older than seven.

On another monitor, surf music provided the soundtrack for a series of stop–motion films representing each participating Boston–area club. Each neighborhood was introduced through a lively recording of the club shouting its area–name. The name of the respective neighborhood was displayed on–screen, handwritten and decorated with colored pencil lettering, doodles and patterns. Some letters—such as the p’s and o’s—were filled in with smiley faces. The clarity of each drawing increased with the volume of the voices, before fading into the actual stop–motion video.

The contagious nature of the exhibit’s positivity left a lasting impression. The vibrancy of each video’s multimedia elements—Claymation, colored pencil drawings, upbeat music and recorded voices—culminated into something truly extraordinary that is definitely worth experiencing. If you plan on visiting the Boston MFA during the summer of 2014, definitely pay the Edward H. Linde Gallery a visit.

The animated films of Boston–area artist Jake Fried (b. 1984) have been exhibited at numerous film festivals, both nationally and abroad. His animations, intricately hand drawn and layered with elaborate detail, have been more experimental in nature as of late, incorporating such materials as gouache, coffee and liquid correction fluid.

“Paired with eerie, ambient soundtracks, Fried’s visions unfold and morph into moving vignettes that can be both dreamlike and nightmarish, but equally fascinating either way,” writes Nastia Voynovskaya for Hi–Fructose art magazine.

Fried’s work has been on exhibit at the Tate Modern in London as well as galleries in New York City, Berlin and Copenhagen, among others. His work has also been featured on PBS, MTV, Discovery Channel Canada, and in The Huffington Post and Juxtapoz magazine. Fried has been an instructor at the Boston MFA since 2007.

About the Author: Claire Paschal

Claire Paschal was a 2014 Summer intern.