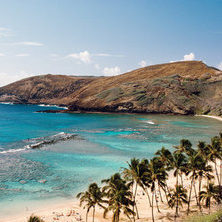 After a five-year excavation effort by Smithsonian Institute scientists, treasures buried under 20 feet of water and sand are home. Belonging to King Kamehameha II (a.k.a. Liholiho), the second ruler of the Kingdom of Hawaii, the riches from the shipwrecked yacht had been scattered across the ocean floor by 191 years’ worth of stormy waters, hurricanes and erosion.

The vessel, which sank off the coast of Kauai in April 1824, had been built in Salem, Massachusetts, in 1816 and was originally called Cleopatra’s Barge. In 1822—two years after the king purchased it—it was discovered that the wood was rotting. The ship was rebuilt and relaunched in 1823; the lavish yacht was renamed Ha’aheo o Hawai’i, or “Pride of Hawaii.”

But it seems King Kamehameha II did not complete the proper rituals for renaming his prized vessel. Poseidon (or Neptune, depending on what mythology is followed) keeps a very close eye on the vessels traveling in his waters; so, the main objective when renaming a ship is to have her original name erased from the Ledger of the Deep (a.k.a. Poseidon’s memory).

A variety of incantations and ceremonies can be found to rename a ship, but there is a consensus on one thing: The main objective is to erase the original name—completely. If the old name is found anywhere—a life preserver, a keychain or even a tattoo—the vessel risks a fate like the Ha’aheo o Hawai’i (but probably with significantly less valuable cargo).

The artifacts, which have a total weight of around 1,200 pounds, include gold, silver, gemstones, utensils and mica. They were initially loaned to the Smithsonian for preservation and study, then to the Underwater Conservation Lab at Texas A&M University for cataloging, conservation and stabilization. After that, the artifacts were returned to Hawaii. The Kauai Museum, established in 1960, is the permanent home of King Kamehameha II’s treasure. On August 15, 2015, the museum opened its exhibit of the artifacts to the public.

King Kamehameha II only reigned over Hawaii from 1819 to 1824. The king outlived his prized yacht by only a few months; the ship sank in April 1824, and King Kamehameha II and Queen Kamamalu died in July 1824 from the measles while on a trip to London.

About the Author: Lauren Cepero

Lauren Cepero was a Summer 2015 intern.