Writing From Beyond the Grave

Writing From Beyond the Grave 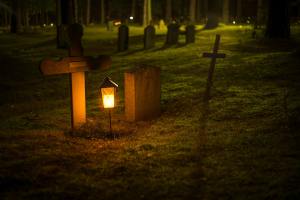 Have you ever wondered if you continued to read Harry Potter because it was a novel written by J.K. Rowling or because it was a Harry Potter novel? What if she had been forced to stop writing while the series was still ongoing and gave her blessing to another author to continue her work? Would you still read it?

While that didn’t happen to Rowling, for other authors the answer has been a resounding “yes.” There has been a trend developing in which new authors, known as continuators, take over an ongoing series when the original author dies or becomes otherwise unable to continue writing. And while some critics are against the idea, it appears that most fans continue to buy the books. For example, The Wheel of Time series by Robert Jordan is a very popular fantasy series with a very devoted fan base. When Jordan passed away in 2007 – as he was writing the final book of the series – it seemed as if it would be left incomplete.

Enter Brandon Sanderson. A longtime fan of the series and fellow author, Sanderson was asked by Jordan’s widow, Harriet McDougal, to finish what her late husband started. And what Jordan intended to be the final book ended up becoming three. And how did Jordan’s devoted fans react? The last six books in the series have all reached the number one spot on the New York Times bestsellers list. Two of those books are considered to have been cowritten by Sanderson and Jordan.

Obviously not all continuators are so successful. Many of them have a difficult time trying to respect the author’s wishes and adapt the characters to be their own. Despite these potential struggles, it seems as though different authors are continuing more series. Ian Fleming’s James Bond is set to appear in a new novel this year called Carte Blanche. Jeffery Deaver will become the second American to act as a continuator for the series. And perhaps one of the most famous continuators, Eric Van Lustbader, continues his work on Robert Ludlum’s Bourne series with the July release of The Bourne Dominion.

And we may be seeing more of this trend in the future. Stieg Larsson, author of the bestselling Millenium trilogy, left behind an almost-completed rough draft for a fourth book – and maybe even enough material for a fifth or sixth – when he died in 2004. His life partner may own the computer files that contain the partial manuscript, but it’s anyone’s guess if Lisbeth Salander will appear in a new book and continue to live on alongside James Bond and Jason Bourne.

About the Author: Jorge Cortes