William Shakespeare: Rockstar of the Renaissance

William Shakespeare: Rockstar of the Renaissance 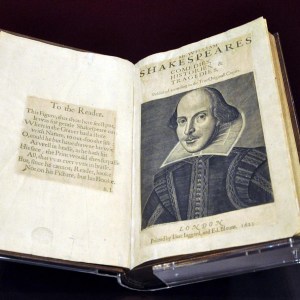 Like many high school students, I had to memorize Shakespeare’s “To Be or Not to Be” soliloquy from Hamlet in my English class. Unlike most high school students, though, I loved the challenge. Shakespeare’s work has always had a special place in my heart, and I was plenty familiar with hearing and performing his work: I’d performed as Helena in a production of A Midsummer Night’s Dream, seen Alan Cumming’s one-man show of Macbeth on Broadway and watched countless adaptations both on stage and screen.

You could say I’ve always been starstruck by the Bard.

Shakespeare might not seem like rockstar material to most, but he is to me. And now he’s even going on tour—or at least, his First Folio is.

The First Folio is the cornerstone of Shakespearean scholarship and was printed a few years after the Bard’s death. It was the first compilation of 36 of his plays, 18 of which had never been printed before—they had only been performed on stage. Without the First Folio, these 18 plays (including Macbeth, The Tempest and Twelfth Night) likely would have been lost forever.

There are around 230 surviving copies of the First Folio. Because later printers often made edits during production, the First Folio gives scholars an opportunity to see Shakespeare’s plays as close to their true form as possible.

A few months ago, the Shakespearean community received startling news: another copy of the First Folio had been found.

It was tucked away in the library of Mount Stuart House, a manor on the Isle of Bute off Scotland’s coast. The copies of the First Folio each tell a story about their owners through the notes they made and are almost like a “CSI crime scene . . . carry[ing] tiny bits of evidence about the people who used them.” This copy in particular, once owned by eighteenth-century Shakespearean editor Isaac Reed, is filled with Reed’s annotations in the margins. Each folio, then, is a glimpse into the past, carrying evidence not just about Shakespeare but also about its owners throughout history.

If you’re looking to glimpse a part of Shakespearean history yourself, you’re in luck—copies of Shakespeare’s First Folio are going on tour thanks to the Folger Shakespeare Library in Washington, DC.

The library holds the world’s largest Shakespeare collection, including 82 of the surviving First Folios. Its traveling exhibition First Folio! The Book That Gave Us Shakespeare runs from January 2016 to January 2017 and will visit all 50 states by the end of its run.

To see when a First Folio will come to a city near you, see here.

In the 1800s, Eugene Schieffelin decided to bring every bird mentioned in Shakespeare’s plays to Central Park in New York City. He released starlings, skylarks and song thrushes, but only starlings survived—and thrived. Today, millions of starlings call North America their home, all because of Shakespeare.