The Lure of the Lake

The Lure of the Lake 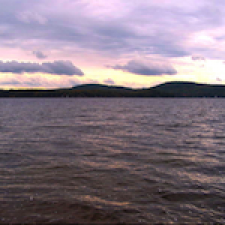 In the 1970s, my grandfather started building a house with his family, including his four, then-teenaged sons, right on the edge of Great East Lake in Acton, Maine. Decades later, my dad would take his family back there every summer. The drive was 2.5 hours—what felt like a long way from my hometown of Framingham, Massachusetts—so during my early years visiting, I would often fall asleep on the ride.

I would be awakened by the rumbling of my mom’s minivan as it lumbered down the narrow, gravel road that ran through the woods surrounding the lake. As we got closer, the car’s roof would break through the trees, and on the last turn onto the property, the bright, blue shimmer of the lake beckoned me.

During these vacations, mornings were filled with the smell of bacon frying, afternoons were spent either learning how to swim or throwing rocks into a nearby quarry, and nights had us trying to adjust the giant antenna hanging from the porch ceiling so we could watch TV.

The house and all the memories living within were the cornerstones of my childhood. When my grandparents broke the news over 10 years ago about having to sell it, I was distraught. Though we don’t own the house anymore, I still possess all of the memories.