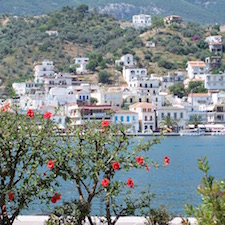 Have you ever fantasized about meeting your favorite writer? How about serving her a plate of mountain trout, with a hearty helping of Sriracha sauce on the side? While working at a restaurant in Western New York last summer, not only did I get to serve dinner to the beloved poet Sandra Cisneros—I got to tell her about the time I followed her words all the way across the globe!

Sipping a pot of green tea, my favorite writer listened as I told her that, while studying abroad in Europe, I traveled with three of my fellow Cisneros-loving friends to the postcard-perfect island of Hydra, Greece, where she had written The House on Mango Street.

Using Cisneros’s memoir, A House of My Own, as our travel guide, we ate calamari at the crest of the mountains, took turns reading her poetry aloud as we hiked along the turquoise coast, and admired the limestone houses she had accurately described as seeming “carved out of feta cheese.” Cisneros’s eyes lit up at the mention of Hydra, and she said she was thrilled to hear that she had sent a group of young female writers like herself to such a special place.

Though I often feel like my favorite books have transported me around the world, I’ll always remember the time one actually did!