The Genius Behind Genius Hour

The Genius Behind Genius Hour 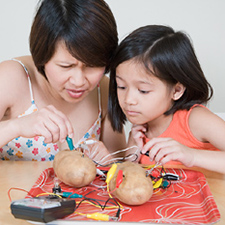 What constitutes a genius? Is it someone who can think and discover revolutionary theories, like Albert Einstein? Or is it someone who can paint and sketch legendary conceptions and ideas far beyond their time, like Leonardo da Vinci? One thing seems to be clear: Genius necessitates creativity, and creativity can be found in everyone.

In schools, a creative concept called “genius hour,” an integrated period of class time that allows students to follow their own passions, is storming in several districts within the United States. It aims to prepare students in larger ways than the traditional classroom setting. With genius hour, students are challenged to think for themselves and create projects that pique their curiosity.

Originally inspired by Google’s 20 percent time initiative and other work–world concepts, the idea is simple: For one day a week, teachers reserve approximately one hour for students to direct their own learning and pursue a passion. The objective is to create a project—with another student or individually—where pupils can foster and develop useful skills that reflect their personal interests. One third–grade teacher, Julie Oliver, has her class’s energy so invested in the idea that she had to split the time up to two days a week: 45 minutes on Thursdays and 20 minutes on Fridays. Some students have even complained about missing school, and others have actively spent time outside of class on their projects during study hall, at home and at recess.

The creative idea behind genius hour pushes students to think on their own and challenge themselves. Many are asked to reflect on the project, with the main idea that “failure is OK.” In a CNN article, Michigan teacher Nicholas Provenzano notes that “with genius hour, failure is an acceptable result, and the emphasis is in learning from failure. This allows students to push themselves and take risks.”

In the same article, seventh–grade Illinois teacher Joy Kirr is quoted, claiming that genius hour is “getting kids to learn on their own and become lifelong learners. They’re not going to have teachers help them throughout life. They’re going to be on their own.”

By encouraging students to independently explore their interests and chase them, there is a growing interest in school, a chance to learn the benefits of time management, a boost of confidence in themselves and their ideas, and a development and care for learning. Some of the projects have stirred a larger impact than anticipated, like a Suicide Prevention Walk that raised $9,000.

The biggest problem some teachers face during genius hour is not students wasting time or lacking focus, but the fact that not every student in class knows how to follow their creativity, or even find it.

“I am trying to teach my students how to be creative,” writes Denise Krebs, a seventh- and eighth-grade teacher.

A few incidents left pupils in confusion and shock in their newfound freedom; some students helped with another student’s project, only to lose eventual interest. Krebs suggested struggling students could create a list: ten things they love to do and learn, ten things they are good at and ten things they wonder. This way, students will not be lost and can learn more about themselves in the creative process.

This is not an hour to take a break and focus on arts and crafts, but an opportunity to help develop a modern love for learning and prepare students for the future. By keeping classroom instruction and focus on projects that will help students learn, teachers are helping their students understand more about self–identity and independent thought at a younger age. This way, students can stay focused on what they love, learn to manage their time efficiently and achieve their personal potential.

According to the OED Third Edition, the word genius derives from the Latin word of the same name, meaning “the male spirit of the family in the divine and spiritual part of each individual,” and the Latin word gingere, meaning “to produce.” Eventually, Romance languages (Spanish, French, Portuguese and Italian) borrowed the words and have followed a similar development since. In the mid–sixteenth century, the French word génie and the German word genie pertained to the classical pagan belief that every person is allotted a spirit guide at birth. By the eighteenth century, this definition morphed into a reference for an exceptionally talented or creative person.

The term génie is also the rooted in the modern idea of a magical genie, most likely borrowed from Antoine Gallard’s French translations of The Arabian Nights, or One Thousand and One Nights, which have also helped shape definitions of other modern words like ghoul.

But when did the phrase having a genius evolve into being a genius? Dictionary.com notes that having a genius was a phrase used to account for the unexplained—a sort of rare, supernatural ability that allowed one to compose or create anything remarkably creative, like Milton’s Paradise Lost. But by the end of the seventeenth century, the word genius began to represent someone’s “exceptional natural capacity of intellect,” and since then has taken on the form we are all familiar with today.

About the Author: Dan Plonowski

Dan Plonowski was a 2014 Summer intern.