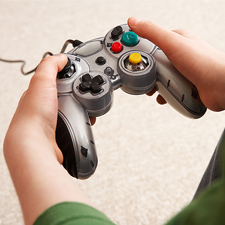 A recent game developed by No Crusts Interactive and released on the iTunes App store is an endless runner that is a little different than your average smartphone app. Stride & Prejudice combines the mechanics of an endless runner with the entire text of Jane Austen’s beloved Pride and Prejudice.

The player controls the character, Elizabeth Bennet, as she runs across the screen. Below her, also scrolling sideways across the screen, are the words from the novel. Whenever there is a gap in the scrolling words along the bottom, the player must tap the screen to make Elizabeth jump over the space. While this tapping allows Stride & Prejudice to feel and act like a game, the main focus of the app seems to be on the simultaneous reading of the novel.

Slate writer Ryan Vogt notes that the app’s process allows for a more interactive side to following the book closely, saying “[t]apping the screen while ‘playing’ Stride & Prejudice becomes as unconscious a process as turning a page . . . almost immediately.”

In a similar vein, a Jane Austen computer game called Ever, Jane is currently in production and will allow users to become a part of Austen’s world. Designed as a massively multiplayer online role-playing game (MMORPG), the game gives its players the opportunity to play out storylines presented in Austen’s novels, such as attending balls, gossiping and raising their social statuses. The tasks in this game are clearly much more in-depth than Stride & Prejudice, showing that the potential market for games based on literature is varied and wide open.

Stride & Prejudice and Ever, Jane are just two examples of technology taking its material from literature, which helps open the doors for discussion about what video games mean to literature and vice versa. And it’s certainly worthy of it, as video games have for decades lent themselves to telling complex stories and giving the player the chance to relate with the characters and situations—like we do when reading a book.

In a BBC article on the subject of video games and literature, Lynsea Garrison paraphrases thoughts by Ken Levine of Irrational Games, a gaming company founded seventeen years ago: “With video games . . . you can make a character turn left—and experience moments of discovery that do not exist in novels. In addition, video game creators use narrative techniques borrowed from books.” Irrational Games developed BioShock, a first-person shooter (FPS) game that chronicles the moral decisions made by the protagonist in a community ravaged by the aftermath of a brutal class war, which is based in part on Ayn Rand’s theory of objectivism.

With so many video games, ranging from endless runner styles such as Stride & Prejudice, to FPS games such as BioShock, to the action-adventure game Dante’s Inferno—which closely follows the first canticle, or part, of Dante Alighieri’s Divine Comedy—we have to ask ourselves: Are video games literature? Or perhaps: Should we view video games the same way we view literature and judge them using the same criteria? There may come a day when we use endless runners such as Stride & Prejudice to help people practice speed-reading or reading comprehension under time constraints. There may even come a day when we decipher deeper meaning by deconstructing video games using the same lenses that we use for analyzing literature. In the meantime, we can play Stride & Prejudice while we wait for the bus, immersing ourselves in the world of regency and duty while Elizabeth Bennet jumps over gaps in her story.

Did You Know?
Technological interactions with texts have been taken to a whole new level in the past several years. Take, for example, J. K. Rowling’s Pottermore. Work on the site began in 2009, and the page was opened to the public in April of 2012. The site is described as “a unique online experience from J. K. Rowling, built around the Harry Potter books.” It allows not only a visual for some of the most important scenes in the series, but also interaction with the world of Harry Potter, such as being “sorted” into one of the four school Houses, making potions or dueling fellow students. The uniqueness of the site comes in the form of new information not presented in the books—direct from J. K. Rowling. Users can discover previously unknown details about their favorite characters and places, all the while following the basic plot of each of the books. Pottermore currently only contains the first four books of the Harry Potter series, but the remaining three are in production for future release. Pottermore is just one example of the visual interpretation of the deeper levels behind a text, one of many games, sites and apps that take the reader’s experience and make it something more tangible to cherish.