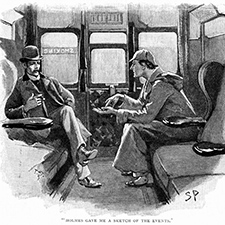 Sir Arthur Conan Doyle’s eccentric yet brilliant detective, Sherlock Holmes, is arguably one of the most enduring literary characters of all time. From the original mystery novels to more current television series and movie franchise adaptations, Conan Doyle’s characters seem to champion all aspects of the entertainment business time after time. Following the recent resurgence of all things Sherlock in popular culture, a recently created Sherlock Holmes exhibition has begun traveling to different cities across the United States, once again capturing the imaginations of its patrons.

Debuting at the Oregon Museum of Science and Industry (OMSI) in October of 2013, the exhibit allows visitors to become real-life Sherlocks, confronted with crime scene conundrums and a handful of clues and tasked with solving a case using nineteenth-century technology and other Holmes-esque sleuthing techniques. Visitors step into reinterpreted life-size crime scenes as well; settings such as the Bakerloo train station and 221B Baker Street are all modeled after the period. Sherlock and Conan Doyle aficionados even have a chance to marvel at the variety of items that are on display throughout the exhibit, such as the author’s original manuscripts, period artifacts and props used in the Sherlock Holmes movies.

In order to solve the mystery, the amateur detectives receive instruction and guidance on the various Victorian-era processes through live demonstrations. They also receive tutorials on such topics as botany, ballistics and the bygone technology of the telegraph. Using this knowledge, along with Holmes’s hallmark skills of deductive reasoning and observation, the sleuths travel through different interactive stations of the exhibit to piece together what happened at the crime scene.

As a result, this exhibit offers a uniquely rich and complex experience for those who walk through it. Science, detective work, popular culture and literature come together under the thematic umbrella of Holmes’s history for a multi-discipline perspective. So far, it has hit Portland and Columbus; St. Louis is its most recent stop, a stint that begins in early October 2014. The exhibit is continuing to make its way throughout the United States, so if you feel an itch to don Holmes’s trademark deerstalker cap, make your way to the International Exhibition of Sherlock Holmes when it visits your area.

Conan Doyle attributed the creation of his Sherlock Holmes character to three real-life inspirations. The first was Joseph Bell, a renowned English surgeon and lecturer who was also Conan Doyle’s one-time teacher. Taken by Bell’s acute observational skills, Conan Doyle fashioned the Holmes persona after his mentor. The second was Èmile Gaboriau, a French mystery novelist whose main protagonist acted as a prototype of sorts for Conan Doyle’s Holmesian invention. The final inspiration came from America’s own Edgar Allan Poe, the author widely acknowledged as the father of detective fiction, whose works attracted Conan Doyle to the genre.