Reading Up an Appetite: Butterbeer Cupcakes Inspired by Harry Potter

Reading Up an Appetite: Butterbeer Cupcakes Inspired by Harry Potter 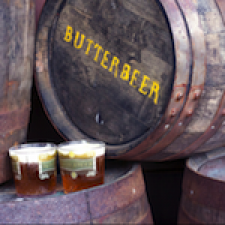 As a reader, writer and self-proclaimed foodie, some of my favorite moments in literature are when an author makes my mouth water with vivid descriptions of a character’s meal. From Heidi’s fire-roasted cheese on toast to Edmund’s Turkish Delight in The Chronicles of Narnia, the books I love most tend to be packed with decadent details that ignite my cravings.

In the fourteen years since I first opened a J.K. Rowling novel, I have attended and hosted more Harry Potter themed events than I can count. From book release parties to movie premiers, I’ve become quite seasoned in the art of crafting muggle versions of the wizarding world’s tastiest treats. No matter how many different recipes I come up with, these Butterbeer cupcakes always seem to catch the snitch and steal the show!

So…maybe your kitchen isn’t Honeydukes, but with these Potter-inspired treats, magic isn’t hard to conjure!