PSG Bookshelf: An Office of Readers

PSG Bookshelf: An Office of Readers 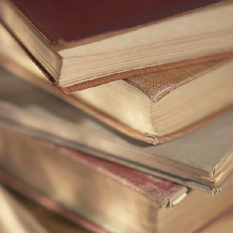 When I first came into the PSG office for my interview, I sat reading until Lori was able to see me. She came over, and the first thing she did after shaking my hand was ask me how many books I had with me. She told me that everyone at PSG carries at least two.

To work at PSG is to see what happens when a group of lovers of reading are put together. The people here don’t just create books—they share them. We trade recommendations and lend each other copies; we know each other’s tastes and send links about Harry Potter. To give our blog readers a better idea of what we read, we’ve decided to offer a glimpse of the PSG bookshelf.

Many people here at PSG are big fans of young adult literature, citing both popular, well-established favorites and newer gems, such as Becky Wallace’s The Storyspinner. Several of us also enjoy murder mysteries and horror books—Don, Colleen and Eileen are very into Stephen King—while others prefer to read fantasy—like the Song of Ice and Fire series—nonfiction or comedy.

When intra-office recommendations don’t suffice, many of us turn to online recommendation services such as Goodreads or Publishers Weekly to find new reads. We also love to browse, whether in a bookstore or via Amazon. Kate has a less traditional method of hearing about new books—she likes to know what everyone on the train is reading, even if it involves leaning over into their personal space a little bit. We’re also not picky about format; we read both print books and ebooks, and Don is a big proponent of audiobooks. We find books through our libraries, our bookstores and our electronic devices.

We overwhelmingly prefer fiction, but most of us enjoy reading a mix of other types of books as well. The same holds true for magazines and newspapers—while many of us consider books our favorite form of reading, we dabble in magazines and newspapers, especially when we don’t have endless time to read. Nick loves fashion magazines, while Eileen faithfully reads her local newspaper, the Eagle-Tribune, and Elizabeth enjoys Yoga Journal.

As for what books we’re reading at the moment, Kate’s making her way through Where’d You Go, Bernadette?, and The Girl on the Train rests on Nick’s desk. Elizabeth is currently reading The Cruelest Month, the third installment of the Three Pines Mysteries series, which features Chief Inspector Armand Gamache. As for Alyssa, who knows—it’s impossible to keep up with what she’s reading, because she finishes up to an astounding four books a week. Meanwhile, when I’m not at PSG, I’m paging through a wonderful—if lengthy—seafaring novel by Danish author Carsten Jensen entitled We, the Drowned.

While many people have embraced the advent of e-readers, few have abandoned print books completely. According to a 2014 study conducted by the Pew Research Center, 87 percent of people who stated they preferred using ebooks had also read at least one print book in the previous year.