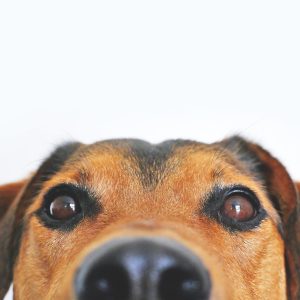 When I’m not interning at PSG, I also work at a doggie day care. I have gotten to know about 40 dogs, from miniature dachshunds to German shepherds to English bulldogs to Great Danes. I rub bellies, toss Frisbees, serve lunch, referee scuffles and scoop poop. Even before this illustrious canine career, I was always a dog person. I grew up with a Rottweiler named Zachary, who, despite the breed’s reputation, was the gentlest soul. He let me crawl all over him, tug his ears, and ride on his back like a horse. In fact, I used to think the Carl series—a collection of illustrative, mostly wordless children’s books about a babysitting Rottweiler—were biographical, taken right from my childhood.

When I arrived at PSG, I found many kindred animal-loving spirits. Almost everyone here owns a dog or a cat—or both! Don and his girlfriend each have a cat, Spiffy and Penelope. Before the four of them moved in together, Penelope visited for a trial run, and luckily, everyone got along perfectly! Ok, almost perfectly. Spiffy really wants to be BFFs with Penelope, who is more of a lone-wolf type of cat. But Spiffy isn’t giving up easily. Oh, and Don knit Spiffy a teal scarf during the brutal 2014—2015 winter.

Like Spiffy and Penelope, Troy’s cat Callie (short for Calliope) is dying to be buds with his dog Cinder, but no dice so far. If the cat tries to cozy up with Cinder, she’ll jump off the couch. Ouch. Maybe it’s because Callie prefers to let mice be, so Cinder has to pick up the cat’s hunting duties as well as her doggie chores, which include attacking the lawnmower.

On the other hand, Nick’s cat, Balu, has absolutely no relationship dramas. He’s just fat and lazy and timid.

Kate, though lacking in her own pets, sometimes dog-sits for a Lab named Sampson who is also content with just people. Sampson is a wiggly yellow Lab adopted from a shelter as an adult. Despite his age, Sampson thinks he is a puppy—crashing into everything, pushing through people’s legs, and planting his face into the rug if his nose itches. He is also a master of gaining affection, pacing back and forth in front of people assembly-line style to maintain a constant petting cycle.

Meanwhile, Eileen and her boyfriend are currently pet-less, but they’re narrowing their search for a boxer or boxer mix to add to their family. (At the time I’m writing this post, they are about to meet with a potential foster dog!) When she was little, Eileen dreamed of transforming into her family’s terrier mutt Graycy, much like a character from the popular Animorphs series. In eighth grade, Eileen got a Westie puppy named Mac. Her parents cared for Mac when she went off to college and were so in love with him that they had to keep Mac for themselves. But who can blame them? Dogs (and cats) steal our hearts.

According to the Guinness Book of World Records, the world’s smallest dog is a Chihuahua named Milly who lives in Puerto Rico. She is only 3.8 inches tall!

About the Author: Ali Dokus