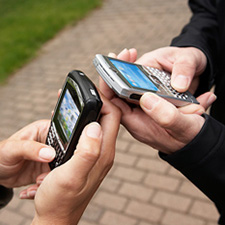 Throughout the history of the English language, people have worried about the language changing and adapting. Paranoia began as early as the Norman Conquest of 1066, when William the Conqueror introduced Norman French into the language used by those in powerful positions in England. Ever since then, English has absorbed countless foreign loanwords into its vernacular. Among other considered “threats” to the integrity of the English language were abbreviations: the earliest use of IOU was in 1618, and nearly a century later came the shortening of such words as (rep)utation and (incog)nito. How’s that for stylish lingo?

Just as how words have evolved throughout the history of English through abbreviations, additions and modifications, our language continues to change with the rise of consumer technology and cultural integration. One of the most important recent inventions to affect this process is the cell phone with texting capabilities. Back when unlimited texting plans and smartphones with touchscreens weren’t as commonplace, users had to cram as many letters as they could into one message without the aid of a virtual keyboard; thus, texting abbreviations.

It’s no surprise that texting lingo making its way into more legitimate settings is accompanied by some backlash. Teachers are often concerned about their students incorporating it into formal writing assignments. There are claims that texting lingo in school occurs because students are just too lazy. But there’s also the truth that they are consistently writing what they know best; teens spend a lot of time texting. Students may not lack motivation; it may be that they simply need more guidance with the different forms of writing.

Speaking of texting, linguists have been studying an intriguing phenomenon: texting acronyms spoken aloud. I’m personally guilty of this trend: I tend to actually say “L-O-L” on occasion. I’m not the only one; sociolinguist Scott Kiesling has been studying similar instances when teens say, for example, “I-D-K” and “O-M-G,” just as they would write in text messages. Similarly, in a process called zero derivation, words like Facebook and Google are becoming verbs that can be conjugated: Facebooking and googling.

What does this mean? English is ever evolving and adapting to new cultures, technologies and a variety of influences. In fact, the Oxford English Dictionary (OED) adds new words to its volumes every year, and google is now a recognized verb in the OED. Its everyday use in speech earned it not only entry into the OED halls, but also lowercase status due to its common usage—a status that both Styrofoam and Kleenex have yet to achieve.

The first mobile phone call was made with “the brick,” a clunky prototype of the Motorola DynaTAC 8000x, on April 3, 1973 by Motorola employee Martin Cooper. This model was over 14 inches long, including the antenna; the evolution of the phone has certainly come a long way in the last 40 years!

About the Author: Shalen Lowell

Shalen Lowell was a Spring 2015 intern.