Move Over, Harry Potter: There’s a New Genre in Town

Move Over, Harry Potter: There’s a New Genre in Town 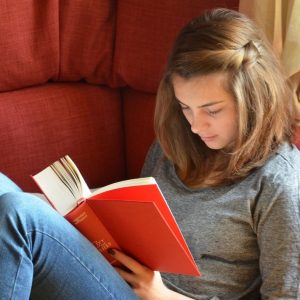 In recent years, The Hunger Games’ “girl on fire” has quickly replaced Harry Potter’s “the boy who lived” in popularity. And, let’s not forget, in between these there was Twilight’s “the vampire who sparkled.” While fantasy and teen paranormal romance are still selling books (the Harry Potter books have just been released with new cover designs ) the current trend in novels has been young-adult (YA) dystopian literature. And according to some, it’s not going anywhere anytime soon.

In an article from The Island Packet, science fiction writer Hugh Howey, in an interview, says, “You can probably chart dissatisfaction with government with the rise of dystopian literature. I think these books have always been popular, but we went through a very rough economic stage and our satisfaction . . . is at an all-time low.” This trend is not something unique to twenty-first century writing. Dystopian literature, a subgenre of science fiction, has been linked to political and societal issues since the eighteenth century (with Gulliver’s Travels “arguably a foundational text.”).

Andrew Liptak points out in his Kirkus article “A Brief History of the Dystopian Novel” that “science fiction isn’t about the future; rather, its cultural anxieties and observations are wrapped up in the present and taken to an extreme breaking point.” Liptak continues to point out many notable examples of famous works of dystopian literature such as George Orwell’s 1984, which was published after World War II. Dystopia, however, is not just relegated to adult fiction, as we have seen with the rise in YA novels’ popularity over the last decade, starting, seemingly, with Suzanne Collins’ The Hunger Games, published in 2008.

Suzanne Collins has said that inspiration for The Hunger Games came from flipping through channels on her TV and seeing people competing in reality shows coupled with images of people fighting in actual wars. And once The Hunger Games was adapted into a film, a flood of YA dystopian novels were published or gained further notice. Many have followed the trend of being adapted for the silver screen: Think this year’s Divergent, based on the first book in the Divergent trilogy by Veronica Roth, or the upcoming film adaptation of James Dashner’s The Maze Runner, also based on the first book in a trilogy of the same name.

However, dystopian literature, like any genre that becomes massively popular, is sitting in an hourglass—and the sand is beginning to trickle down. While Harry Potter is still wildly popular, more recent fantasy and books containing magic themes aren’t reaching the desired level of popularity. It seems like young adults also got tired of anything with a vampire—e.g., the Twilight-era teen paranormal romance—though zombies still refuse to die. But what is the new trend? What is turning the hourglass over on YA dystopian literature?

Enter contemporary YA fiction. John Green’s The Fault in Our Stars, which came out in 2012, has sold millions of copies and has gained wide acclaim, may be the game changer that pushes dystopian literature aside. For while contemporary YA fiction has always been popular among teen readers, Green’s latest novel shows that YA fiction is being taken more seriously.

This is not to say that YA dystopian, fantasy, paranormal or contemporary fiction get only one turn in the spotlight. Like all trends, those in YA fiction come and go, and then come back again. The difference now, though, is that with the advent of Hollywood and more people taking YA fiction in all of its genres more seriously, there is a greater focus on what will work at what time. So while “the girl on fire” is still blazing across the big screen and bookshelves, “the boy who lived” and others like him may one day charm his way back into the spotlight.

Popular sci-fi dystopian book series Uglies, written by Scott Westerfeld, is in development for a television series. The Uglies series was published in 2005 and takes place in a future world where teenagers undergo plastic surgery on their sixteenth birthday to transform them from being “ugly” to being “pretty.” But being pretty comes with a price.

Westerfeld is no stranger to YA genre fiction, having written several books of differing genres from his sci-fi book Peeps to the steampunk trilogy series Leviathan to So Yesterday, a contemporary YA novel about a young man who wants to find out what is the most “cool.”