Is Your Writing Style the Right Style?

Is Your Writing Style the Right Style? 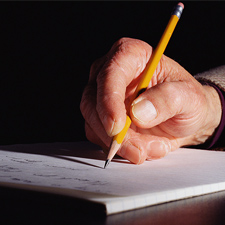 Unfortunately, my cooking skills are limited to mac and cheese, Bagel Bites and my GrubHub app. However, I do consider myself a “foodie.” Every time I dine at a new restaurant, which is probably once every two weeks, I make a conscious effort to order the most popular or interesting item on the menu—unless they have mussels. Mussels trump all.

Once I’m enjoying the meal, I begin to ponder what goes into preparing this meal—besides the ingredients—and how I could re-create it. I would need the instructions to be as simple as possible because, when it comes to cooking, an “obvious” step isn’t so obvious for me. Let’s face it; I’m no M. F. K. Fisher.

The famed food author pioneered a change in how Americans viewed food writing in the 1940s by storytelling about her life and how food played an integral role in it rather than simply giving her readers what they had come to expect from female food writers of the time—recipes. She gave her food life by sharing her own, thus becoming a revolutionary food writer without even trying.

Discussing the author, an article from The Chicago Tribune titled “The Very Surprising M. F. K. Fisher” by Bill Daley recalls, “Fisher did not consider herself a food writer. And, she wasn’t, in the context of her time. Fisher’s focus, as she memorably described it in 1943’s The Gastronomical Me, reached out to ‘wilder, more insistent hungers.’”

In the past few decades, this idea of authors breaking the rules of or creating new rules for certain types of writing has become known as New Journalism. Authors who used this style include Susan Orlean, Michael Lewis, Gay Talese and many more; they wrote about topics ranging from travel writing to political satire to stories of ordinary people.

In a Slate book review about M. F. K. Fisher’s The Gastronomical Me, Fisher is quoted as saying, “Our hunger unites us; our choices, in restaurants and life, make us individuals.” This notion, in my opinion, directly relates to the idea of New Journalism. These authors hunger to create something that will stir public reaction and generate literary praise, so they have purposely strayed from the norms of what is considered appropriate writing in their respective genres.

But is this change necessary? And if so, how can an author bring about this change?

There are countless authors who adhere to the guidelines of what has come before them and receive great success, while there are those who flop. Simultaneously, there are many authors who try to establish a new style of writing, only to have it rejected by critics and readers. So what does it take to be one of the chosen few who present a new style that is accepted by critics and readers alike? As a writer, I try to maintain my voice and style even when discussing topics that I am not heavily invested in, and I always want to review what the editor has done to make sure the piece retains that voice and style—which many writers know is a luxury that is oftentimes not afforded.

Creating an individual voice and style can be a challenge, particularly for students studying journalism. Many classes—and I can attest to this—include discussions of the prominent authors of the time. This is something I think is necessary, but it does blur the line between trying to create your own style and trying to emulate the style of an author who is doing well.

It takes confidence to be a writer, and you have to be confident in your work. When you publish an article, you need to feel like it’s the best thing you’ve ever written because, I believe, that’s the only way you’ll get readers to see that too.

Did You Know?
One characteristic of New Journalism that defined it against traditional journalism was the subjectivity of its reporting. Whereas traditional journalism strove for objectivity in its telling of the facts, New Journalism used literary techniques such as a narrative that unfolds in scenes, dialogue and strong point of view to give a more personalized account. This same tension between objectivity and subjectivity in reporting is still in the news, but there is an effort afoot to rejuvenate the New Journalism spirit. A venture recently undertaken by journalist and blogger Glenn Greenwald, with the backing of eBay founder Pierre Omidyar, promises to “throw out all the old rules” and tell the news from a clearly stated viewpoint.

Whether this initiative succeeds or fails will be a test of time, but as a starting point for conversation about the virtues of objective reporting, Greenwald and New York Times Op-Ed columnist and former executive editor Bill Keller sparred on the pages of the Times. You have to give the Times credit for printing this dissent on its own pages, but the complaints raised against reporting in our time—that journalists are so intent on hiding their own perspectives that they actually connive at the reporting of falsehoods—deserve an audience. Especially in the whirlwind of Wikileaks and government scandals, how the “old” traditional journalism holds up to newer practices remains to be seen.