Experience the Prehistoric World through the Chauvet Cave

Experience the Prehistoric World through the Chauvet Cave 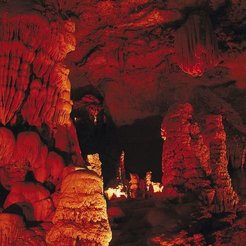 Sometime over 30 thousand years ago, prehistoric humans found their way to a limestone cave in the Ardèche region of southern France. Here they drew more than one thousand images in what is believed to be the oldest cave art in the world. Around 20 thousand years ago, a rockfall covered the entrance and the cave remained undisturbed until December of 1994, when Eliette Brunel Deschamps, Christian Hillaire and Jean–Marie Chauvet discovered the cave while spelunking. Archaeologists soon rushed to examine and protect the cave.

The drawings display artistic skills previously unseen in art from that period, such as use of shading, paint made of charcoal or red ocher used with engraving, and anatomically correct images. In a virtual tour of the caves, you can see how the prehistoric artists used the shape of the cave to provide the illusion of three-dimensionality. Some of the different types of animals depicted include ones dangerous for prehistoric humans to observe—mammoths, bears, lions, rhinos, bison and aurochs.

The rockfall that blocked humans out also blocked animals in. Some of the bones found include cave bears, wolves, ibex, small reptiles and bats. These remains make up some of the four thousand remains that have been inventoried in the caves, which also include prehistoric plant life and human footprints.

As a way to share this treasure with the world, hundreds of people spent eight years and over $50 million to create a 3D model of the cave for a replica built 1.5 miles away at Vallon-Pont d’Arc. The replica, which opened in April 2015, is housed in a concrete hanger and replicates the interior of the caves down to the temperature. The interior of the cave is replicated by concrete layered over a metal scaffold, with stalactites and stalagmites made of resin. The drawings were created using images projected onto the walls as a guide for artists to replicate.

For those of us who cannot travel to France, the online tour will have to suffice, but those who can see the replica of the Chauvet caves will be able to experience the world of our prehistoric ancestors through the art they created, which could have been lost to time if not for a lucky rockfall 20 thousand years ago.

Never heard of an auroch before? Aurochs are an extinct form of cattle that stood 6.5 feet tall, weighed around 2,200 pounds and were known for having a temper “akin to a tetchy rhinoceros.”

About the Author: Chelsea Wilson

Chelsea Wilson was a 2015 Summer intern.