Discovering School Days around the World

Discovering School Days around the World 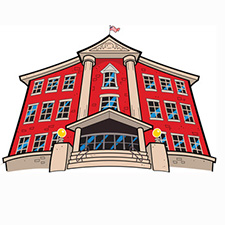 For the fall of 2014, 49.8 million students were predicted to have attended public elementary and secondary schools in the United States.  Of these students, all were expected to be absent on the same day: Thanksgiving. In other countries, of course, this was to be a normal school day. But different holidays aren’t the only variances that can be seen between school days in America and school days in other countries.

An average day in the American classroom starts at 8 a.m., with about 40 percent of schools starting earlier. For many school districts, the day ends around 3 or 4 p.m. But for many students, it is the beginning of the school year that truly sets the stage for a school year’s experience—on average, schools in the United States start around the end of August and let out around June.

This is what students, parents and educators have become accustomed to. But how do international schools compare?

In the results of a study conducted by the Pew Research Center, 33 countries, including the United States, are found to have an average of 790 hours of instruction per year for primary schools. This consists of a range between 470 hours for Russia and 1,007 hours for Chile. For middle school students, the average was higher, at 925 hours per year. This range was between 741 hours for Sweden and 1,167 hours for Mexico. While some countries have exceeded the average amount of instructional hours, this doesn’t imply that the increase in hours is tied to success in the classroom; for example, Finland averages about 608 hours and is one of the top international performers.

When it comes to the international school systems, number of instructional hours is not the only difference. Some schools around the world experience a school week that’s different from ours. For example, primary students in France only attend school four-and-a-half days a week; this includes a half-day on Wednesdays. On the other hand, some schools in Japan have school five days a week with one Saturday class a month.

How students in the United States experience their school day is perhaps unlike that of other students around the world. But it is different for any student, regardless of location. What matters is how we choose to approach the school day. Of course, two-and-a-half days off does sound wonderful!

The 70-acre main campus of Institut Le Rosey, a boarding school located in Switzerland, includes commodities like tennis courts, saunas, a 30-horse indoor equestrian center and a private sailing center. Having a yearly boarding and academic fee of about $110,000, Le Rosey—the “school of kings”—is considered the most expensive school in the world.

About the Author: Annemarie Tompsen

Annemarie Tompsen was a Spring 2015 intern.