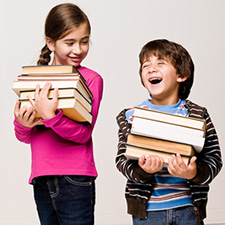 “It may seem crazy what I’m about to say,” but Pharrell Williams will be releasing a children’s book in September. Williams is working with G. P. Putnam’s Sons, an imprint of the Penguin Group USA, to create a series of four books. The first is inspired by his platinum hit song “Happy.” The book will feature photos of children all around the world and what they feel it means to express happiness. The book is planned to have an initial print run of 250,000, and Williams is hoping to share his creativity and inspiration with young readers all over the globe. He says in a public statement, “My collaboration with Penguin allows me to continue a dialogue with these children in a fresh, new way. We’re both committed to feeding the curiosity of young minds with imagination.”

But Pharrell Williams isn’t the only celebrity working to inspire children through the written word. Other celebrity children’s book authors include Whoopi Goldberg (the Sugar Plum Ballerinas series); Barack Obama (Of Thee I Sing); Charles, Prince of Wales (The Old Man of Lochnagar); and Jimmy Buffet (The Jolly Mon and Trouble Dolls).

A trend of celebrities taking an interest in authoring children’s books has encouraged children and parents to become increasingly involved in the reading process. Parents are buying books by celebrities because of the recognized authors’ names, and kids are enjoying the fun and inspirational messages the books promote.

One celebrity who has long been juggling her creative talents is Julie Andrews (Edwards). Best known for her roles in The Sound of Music and Mary Poppins, Andrews has been writing children’s books for about 35 years. Her first two novels were Mandy and The Last of the Really Great Whangdoodles, but her most famous books include The Very Fairy Princess, The Little Bo and Dumpy the Dump Truck. Andrews has also released a best-selling audio book called Julie Andrews’ Collection of Poems, Songs, and Lullabies.

The newest edition in her collection is her book The Great American Mousical, a story about a theatrical troupe of mice, which Andrews co-authored with her daughter Emma Walton Hamilton and which was illustrated by her former husband, Tony Walton. The book introduces children to the art of theater, but Andrews is bringing something even greater to the world: It was also adapted into a musical that Andrews directed herself.

Celebrities like Andrews and Williams have been able to use their fame to encourage reading. What could make us more “Happy” than that?

Alongside his 14 albums and 4 Grammys, “Weird Al” Yankovic also adds children’s book author to his list of accomplishments. His work includes the books My New Teacher and Me! and When I Grow Up, both illustrated by Wes Hargis.

About the Author: Annemarie Tompsen

Annemarie Tompsen was a Spring 2015 intern.