Books with Bells and Whistles

Books with Bells and Whistles 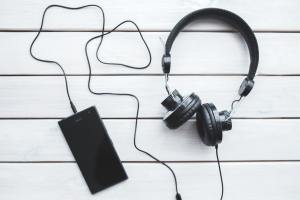 Mark Cameron was traveling in Hong Kong when he noticed many commuters, like himself, simultaneously reading e-books and listening to music. He also noticed the obvious disconnect between the two activities, as the music had nothing to do with what people were reading. It was then that Mark wondered if there was a way to combine the experience: to read an e-book while listening to relevant music, like a soundtrack. Mark shared his idea with his brother Paul and, together, they created Booktrack in 2010.

Booktrack is a new type of e-book: one with its own soundtrack. Booktrack hopes to improve the e-book experience the same way that movies use music to heighten tension and emotions. And like a movie soundtrack, Booktrack chooses music that fits perfectly with a specific book, character or scene. Booktrack also allows readers to adjust the speed and settings of the music to their own specifications as they read.

By working with the author, Booktrack is able to further immerse the reader in the book. Imagine the background music starting very low but reaching a crescendo as with every sentence you come closer to solving the mystery in your book. Mark and Paul Cameron wanted the music to fit the scene. Sound effects are also added to the music so that the person can be part of the action. I can picture myself reading alone at night and hearing the creaking of stairs as an intruder sneaks about the protagonist’s house. It’d be so scary and exciting at the same time!

The first book featuring a soundtrack is The Power of Six, a young adult novel published by HarperCollins. Tara Weikum, an Editorial Director for HarperCollins Children’s Books, said she believed The Power of Six could work with a soundtrack because the book is “cinematic in scope.” The Power of Six has over 70 original compositions and Booktrack is already working with professionals so that every book has an original score. Weikum hopes to give more to readers who fall in love with the book.

Booktrack opens a whole new dimension to book reading, adding another sense to the reading experience. But this raises the question if the music industry – which has drastically changed in the last few years similar to the way the publishing industry has – will become involved in Booktrack. Will artists and bands write songs specifically for e-books the way they do for movies? Will there be another musician like Celine Dion whose song, “My Heart Will Go On,” became synonymous with the movie Titanic? Or is Booktrack simply a more expensive way to create playlists on iTunes and listen to them while reading? It will be interesting to see how this idea takes hold in the future!